And then there were "None". 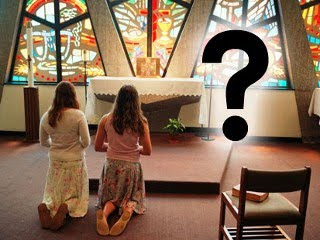 There is an interesting article in today's, "Religion Dispatches" entitled, "Seeing the Future: Can Religion Evolve and Survive in a Changing World?" by Peter Savastano, which provides a larger context for the bold assertion of some on the "Right" that the ABC's two track / two tier" scheme is going to happen.

Savastano writes about what I have come to call "the emergent non-church movement," specifically addressing the "Nones" whose mantra is "spiritual but not religious".

Of the evolution of religion, he writes:

To begin with, the idea that only one religion is true, while all the others are not, will have to be abandoned. Perhaps one way of hastening this process is to think of religion as being like language. Languages are not true or false. Rather, each different language seeks to express the shared history and life experiences of those people who speak it. In a rapidly globalizing world people will increasingly need to be fluent in more than one language.

Likewise, it will become necessary to speak more than one religious language; not just for the sake of communication but in service of human spiritual growth and enrichment. Using myself as an example might work like this: my native language is Christianity.

My native dialect of Christianity is Roman Catholic. However, I also speak Eastern Orthodox, Episcopalian and Quaker dialects of Christianity with considerable fluency. I speak other religious languages too. In the language of Islam I speak the Sufi dialect; in the Buddhist language I speak Zen and Vajrayana dialects. I also speak various African Diasporic languages such as Haitian Vodou, Cuban Santeria, and Brazilian Candomble.

Being able to speak each of these languages does not deny the validity of my own native religious language and dialect, but rather enriches my capacity to communicate with others who may speak a different religious language, providing me with even more tools for making sense and meaning out of the human predicament.

I don't think +++Himself's two track / two tier scheme is a reflection of learning to become fluent in several religious languages. Indeed, I think, if the "orthodox analysis" is correct and the two track / two tier" scheme is "going to happen, of that I am more certain than ever," (and - surprise, surprise - I am not) then it will only serve to drive more and more people away from Anglicanism in particular and Christianity in general and into the spirituality of the "Nones."

Why do I say this? Unlike these gleeful orthodox predictions - which, without a wit of substance to back up their claims sounds more like wishful thinking - I think Savastano provides a basis for the statement that, if the two track / two tier IS, in fact, implemented, it will fail miserably:

"When I ask Nones why they identify themselves as spiritual but not religious, many say it is because while most religions claim to teach peace, love, compassion, and the unity of humankind, the violent history that is their heritage (my own Roman Catholic tradition included) do not bear witness to these claims.

As a result, many Nones seek to distance themselves from what they perceive as the hypocrisy and violence promulgated by formal religion. . . . . Another common refrain is a distrust of authority, especially when it comes to the doctrinal and dogmatic claims of organized religion, claims that cannot easily be measured or verified in any tangible way."

Two track / two tier schemes will be seen for what they are - a religious manifestation of class discrimination systems which have been seen in the models such as the Upstairs / Downstairs Maid and Apartheid.

This is absolutely antithetical to the Spirit of Jesus.

If a two track / two tier scheme is implemented, it will open the way for a third: "None."
Posted by Elizabeth Kaeton at 9:37 AM

Gee, every week that we use Form III of Prayers of the People, I'm praying "that we all may be one." Not two. How 'bout you?

In the midst of the multi-lingual vision, the homophobic schismatics are the US English folks in religion. They are swimming against the flood and the idea that Dr. Williams is leading them into deeper water is very sad.

The Christian church was never one in uniformity of belief. That's a fantasy of "the faith once delivered" folks.

In the short run the 2-track scheme will benefit neither track, with, as you say, Elizabeth, the number of "nones" increasing, but taking the long view, a number the "nones" may gravitate to the track that will "teach peace, love, compassion, and the unity of humankind", rather than "the violent history that is their heritage".

We gotta teach it, but we gotta live it, too.