The Gospel According to Yoda 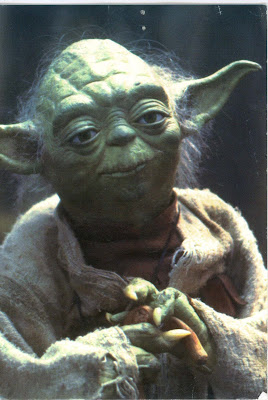 You'll excuse me for sounding impertinent but some of it sounds a bit like Yoda might have written it, doesn't it?

You do not have because you do not ask.

You ask and you do not receive because you ask wrongly.

I like Yoda. Sadly enough, he has become, for an entire generation, the closest thing to a resource for understanding spirituality and prayer.

I suspect every generation has one. I seem to remember the popularity of Master Po in the Kung Fu Series. As I recall, instead of an apprentice named Luke Skywalker, there was someone Master Po called "Grasshopper."

And, let us not forget Professor Dumbledore to Harry Potter. I suppose in my generation, it was Jiminy Cricket to Pinocchio.

"Fear is the path to the dark side. Fear leads to anger. Anger leads to hate. Hate leads to suffering."

Somebody give the weird little creature an, "Amen."

Here's the thing for me about the message from St. James' Epistle: Prayer is a mystery. I think that's true because prayer is, essentially about relationship. And relationships, especially between God and ourselves and others, are an even deeper mystery than prayer.

In order for prayer to work, one must believe in mystery.

As Luke Skywalker once said to Yoda, "I can't believe it."
And, Yoda said, "That is why you fail."

'Belief in mystery' sounds like a mystery itself. That's because it is.

The other true thing I know about prayer is that even when we don't believe in mystery, prayer can still work.

That's the mystery of prayer.

Or, as Yoda would say, "A mystery is prayer."

Or, as Jesus said,

"Whoever wants to be first must be last of all and servant of all."

I have always had a fondness for Jiminy Cricket and his pearls of wisdom as in:

Or how about Thumper in Bambi, when he says: "If you don't have anything good to say, don't say anything at all!"

How much longer are we going to ignore our consciences or keep our mouth shut, (ok sometimes). When did we become a nation of screamers and where is the skill of listening? Who really listens anymore?

I am growing fond of Yoda, but give me Jiminy Cricket!

I was always into Sci-Fi. One of my favorite was the Dune series by Frank Herbert. In the original novel we have the mantra offered by the The Bene Gesserit Sisterhood against Fear.
"Pg 19 of Dune"

I must not fear.
Fear is the mind-killer.
Fear is the little-death that brings total obliteration.
I will face my fear.
I will permit it to pass over me and through me.
And when it has gone past I will turn the inner eye to see its path.
Where the fear has gone there will be nothing.
Only I will remain.