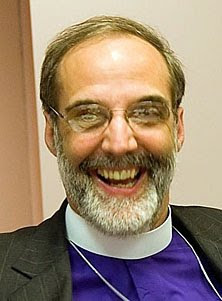 This is my bishop.

Well, okay. He's the bishop of the diocese of Newark.

Which is, of course, my diocese.

It's been a long, hard day. Just humor me.

So, after this long, hard day, which began with a 7 AM Holy Eucharist with Public Service of Healing, and then a few back-to-back meetings, and into the office to organize stuff for the start of the Program Year, then over to see two of my parishioners in the hospital (one of whom died this afternoon), and fretting over a third who was having a port-a-cath inserted so she can begin her 18 week course of chemotherapy (but she's in a special study because her insurance wouldn't cover the medicine she needs), and over-hearing several conversations in the hallways and corridors of the hospital from health care professionals about Health Care Reform (they were decidedly pro-reform movement), and wondering how to approach this subject in a sermon in Republicanville, USA (which is where I live and move and have my being - and my altar and pulpit). . .

I came home to this ENS (Episcopal News Service) article.

It's titled "Bishops Working for a Just World to lobby for health care reform."

Much to my delight, I discovered that my bishop (Beckwith. Mark Beckwith. From Newark. New Jersey.) is one of a group of Episcopal Bishops who are going to DC all next week to lobby Capitol Hill in support of health-care reform.

I mean, not only is this FANTASTIC, that they are - my bishop is - doing this, but now, you see, I have a reason to talk about it from the pulpit.

Did you hear? My bishop. Your bishop. OUR bishop is going to lobby Capitol Hill next week for Health Care Reform.

According to the ENS article:

The group, "Bishops Working for a Just World," seeks universal heath-care coverage and solutions to domestic and global poverty and the environmental crisis. Bishops make annual trips to the nation's capital to advocate for specific legislation or changes to legislation.

"The issues that we lobby are the issues voted on by General Convention," said Diocese of Newark Bishop Mark Beckwith.

Here's a bit more of a snip from the ENS article:

The Office of Government Relations (OGR), based in Washington, D.C., organized the trip and prepared the bishops for meetings with elected officials and administrators. Created by Executive Council in 1979, OGR's mandate is to lobby Congress and the president in response to legislation passed at General Convention.

. . .The passionate, often angry and vitriolic, protests that have characterized the health care debate nationwide have also played out online, including on the Episcopal Church's Facebook page and in Episcopal Life Online's Reader Response section, with largely negative comments outnumbering those supporting the church's stance favoring reform.

Some Episcopalians have expressed indignation at the church for meddling in government affairs, evoking the First Amendment's separation of church and state.

Most people associate lobbying efforts with profit-minded corporations. The church and other organizations concerned with human lives and values must lobby the government, too, Beckwith said.

"And what could be more important than health care?" he asked. "We need to be about the issue of telling the story, engaging the world, and part of our engagement is to provide help and support for people who have been denied access to health care."

There's more - much more - good news in the article including links to those above cited resolutions and TEC's Facebook page and Episcopal Life Online Reader Response Page which I'm just to lazy to link for you.

Like I said, it's been a heck of a day - and I ain't quite done yet. I just thought I'd post this while I eat my dinner and before I go out again.

I rejoice in this action of my bishop and urge you to consider writing, emailing, or calling YOUR bishop and ask if s/he is part of BWJW. And, if not, why not? And if s/he is, give him/her and attaboy / attagirl - and, perhaps a few questions - or, "talking points" or, even better personal stories - to take with them to DC.

Is this a great church or what?
Posted by Elizabeth Kaeton at 6:31 PM

That is uplifting news.

Yes, it's a great church! I am proud of you and all God's people working for justice.

That is wonderful --imagine, Bishops taking on the "world." (read "system.") Somehow, just somehow, I doubt Virginia will be represented in that crowd.

Somebody, please prove me wrong...