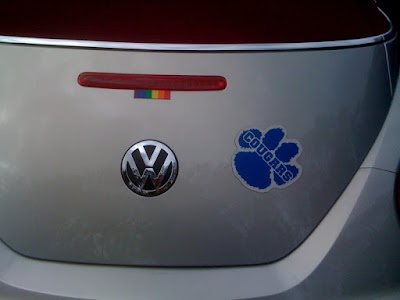 The "Cougars" is the name of The Chatham High School Football Team.

Last night, I went to a local very posh club where I'm co-presiding at an Interfaith Wedding late in October, just to check out the room and help the perspective bride and groom decide on flowers, the path of the procession and all things liturgical and decorative.

I passed by the Valet parking, found a place to park my lowly VW Ragtop Bug amidst the Mercedes, BMWs and Caddies, and started walking up the hill to the club. I noticed a few men looking at me as I got out of my car.

I figured they were either looking at my collar or chuckling about "Lucy True Bug" and how out of place she must have seemed.

It wasn't until later, while I was sitting at the bar with the father of the bride, who also happens to be a long-time, dear friend, that I overheard a few of the men talking. As I listened, I realized that they were talking about my car.

"Hey," said one, "Did you see that the 'Cougars' are now advertising that they are here?"

"Get out!" said another.

"Yeah, actually has a bumper sticker," he said.

"Whoa, like they really need to advertise," said another as they all laughed uproariously, the way men do when they've had a salacious thought fueled by a few $15 a glass, single malt scotch.

Then, it hit me. They were talking about "Cougars" not "The Chatham High Cougars."

The Urban Dictionary defines Cougar as:

"That cougar I met last night, showed me s**t I didn't know existed, I'm goin back for more."

I felt my face get hot and my friend asked me if I was okay.

I told him what I had overheard. He laughed as he shook his head. Then he said not to worry, that he would walk me to my car.

We laughed again as I said, "Yeah, right! In their dreams!"

Imagine! I can't. But, apparently THEY could.

I wonder what they made of the little rainbow sicker that's also on the back of my car?

Probably didn't see it. Too busy fantasizing about 'Cougars'.

Honest to Pete! The nerve of some mother's children!
Posted by Elizabeth Kaeton at 10:57 AM

Well, it's as I've said before, Elizabeth, God didn't feel we had enough rons, so he keeps sending mo' rons!

Oh my goodness. . . If that had happened to me I would have just died on the spot --probably having an unstoppable fit of the giggles at the same time. I do hope your sense of humor has taken over. This is awful and just TOO funny for words. I think maybe you need a larger rainbow sticker.