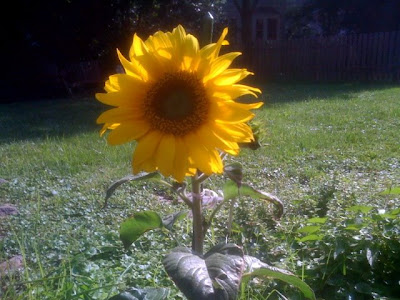 I planted this sunflower last Saturday. There was only one bud and it was closed tighter than a fighter's fist in a boxing ring.

This is her today - with three more buds behind her.

She's pulling up lots of nitrogen from the soil, so I'll have to feed her often. I also pray that I don't have to compete too hard with the Bluejays and Squirrels for her to keep growing. I'd love to be able to harvest some of her seeds and watch her children grow.

I told this story recently, but it bears repeating.

Robert Raines, former director of Kirkridge Retreat Center, once told a story about a woman who was diagnosed with cancer. When she learned her diagnosis, she decided to take whatever little extra money she had stashed away and instead of spending it on medical care, bought thousands of daffodil bulbs. She spent days planting them on the side of the hill on which her little house stood. On one of the coldest days of winter, when everything was barren and frozen, she died.

Later that spring, thousands and thousands of daffodils bloomed, their yellow trumpets competing to shout "Alleluia!" to Our Most Abundant God. People would come from miles around to look at this glorious site.

Raines called her "A Plotter of the Resurrection."

I'm jealous. I tried to plant tomatoes yesterday. Even with the mattock I could not dig a hole deep enough to plant anything. As most of the rain has managed to pass around us, the ground is rock hard which, combined with the rocks that I seem to grow better than anything else, makes making a dent nearly impossible. The tomatoes will be planted by a neighbor and will hopefully yield huge striped heirloom fruits eventually.

My first daylily bloomed yesterday - a spot of yellow among the as yet untrimmed grasses. Thank God for flowers, especially the yellow ones like dandelions and colts foot which remind us that winter doesn't last forever and sunflowers which feed much of God's creation.

I love your sunflower! When I lived in Nyack, awash in more deer than Bambi's nature preserve, there was no way I could ever grow them.

I should plant some up here in the farthest reaches of Smalbania.

I have heard that bulb story before and it continues to stir me. Brilliant.

Back in Nyack there was a house with a big slope in front of it... It would start a bright yellow sea of daffodils, then change to iris as the summer progressed. It was so lovely.