Minns moves base to Diocese of Newark 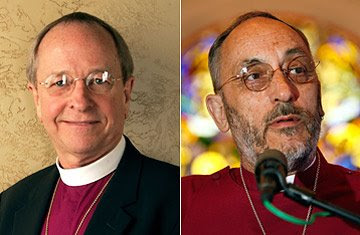 Gay Bishop vs. Straight Bishop
Saturday, Jun. 07, 2008
By DAVID VAN BIEMA
Times Nation
The first bishop married his gay partner in New Hampshire this weekend. The second bishop will be settling into a new house with his wife in a New Jersey suburb, chosen so that he can shuttle more easily between conservative churches opposed to the first one's theology and lifestyle.

Bishop V. Gene Robinson of the Episcopal Church USA and Bishop Martyn Minns of the Anglican Church of Nigeria are the twin bookends of the current struggle within the worldwide Anglican Communion. Fallen bookends, one might add, insofar as they are the only two Anglican bishops so far to be dis-invited from the Communion's once-a-decade Lambeth Conference this July by the Archbishop of Canterbury, Rowan Williams.

The tall, British-born Minns, 65, got the boot because he led a batch of U.S. Episcopal congregations, including the one where he was church rector, out of Episcopalianism and into the authority of the Anglican archdiocese of Nigeria — primarily out of dismay that Episcopalianism had elected the openly-gay Robinson to be the bishop of New Hampshire. And Robinson, 61, a chatty, gray-haired Kentuckian who once said he looked forward to being a "June bride," was blackballed from Lambeth, (which will convene in Canterbury), because Williams felt that the Episcopal church in the U.S. had made him a bishop in the teeth of advice by the Anglican leadership not to engage in such a divisive move.

So where does that leave the two antagonists this summer? In each case, the present is about family and the near future about religious politicking. Robinson got hitched Saturday to his partner of 20 years, Mark Andrew, at St. Paul's Episcopal church in Concord, N.H. in a civil union presided over by a justice of the peace, according to the Concord Monitor. In a recent essay he says he regretted the June bride remark, noting that he should have made a more sober statement about the longing of gays and lesbians to celebrate their own "faithful, monogamous, lifelong-intentioned, holy vows," the kind of sentiment he also expressed in his recent book In the Eye of the Storm: Pulled to the Center by God.

Minns, meanwhile, is spending his weekend in Morristown, N.J, where he moved last month. His five children, ages 42 to 25, are all out of the house, although he quipped to TIME that with 12 grandchildren "I'm following the Abrahamic covenent" that promised multiple offspring to God's people. The move from his original base in Virginia, he says, was necessitated by a need to find "a good place near an airport," since his Convocation of Anglicans in North America, originally a handful of Virginia Episcopal congregations that embraced the authority of Nigeria's ultraconservative Archbishop Peter Akinola has now grown to 65 congregations spread country-wide.

On Monday, Minns will jump on a plane for Jerusalem to help prepare a meeting of conservative Anglican bishops in two weeks called the Global Anglican Future Conference (GAFCon) that he claims will attract Anglican bishops from 27 countries.

It is distinctly possible that the GAFcon meeting will determine what actually happens at July's much larger Lambeth Conference, which may see bishops from 160 countries in attendance. That is because, as Robinson put it to TIME recently, Lambeth "is designed not to be productive in the conventional sense." Although long heralded as the potential Armageddon where opposing bishops could finally duke out a position on sexuality and biblical fidelity, Lambeth's planners intentionally left out any opportunity to produce a concluding statement, apparently turning the meeting into a toothless series of conversations.

One of the few things that might shift it could be the goading from the bishops gathered at GAFCon. Although observers have accused conservatives like Akinola of trying to force an Anglican schism, Minns, who acknowledges occasionally polishing Akinola's prose, says "schism will not happen." Instead, he predicts a Communion "realignment" with the conservatives as the new center, possibly catalyzed by the articulation in Jerusalem of a "new revised version of 'this is who we are''" featuring traditionalist positions on Christ's divinity, his virgin birth, and a conventional understanding of marriage." Asked whether such a statement could prove exclusionary to liberal Anglicans, he said, "it will be up to the American Church to see whether it wants to be part of that or not. "

Or, to the entire Lambeth conference to chew over a month later.

It is clear that Robinson, for one, wishes he had not been excluded from Lambeth. He will be present in Canterbury as the meeting is held; and on two evenings his fellow American bishops will invite small groups of their colleagues to "meet me, hear a bit of my story, and see that their brother bishop Gene doesn't have horns and wear a dress."

Meanwhile, as befits Minns' ambivalence about the power structure behind Lambeth, the conservative bishop plans to stay away. "I'm not invited," he says "so why go? I have a life." Yet his life will keep him in the general area. "It just so happens that I do have family in England," he says. "In Nottingham, Penzance, and the Isle of Wight. I'll be there for little bit." Just in case he's needed, one presumes.
Posted by Elizabeth Kaeton at 4:25 PM

Now that he's in the neighborhood, you, Jack and Louis need to provide housewarming goodies?

I've already written to Louie to make some iced sweet tea, I'll bake the cake and together, we'll show him what Diocese of Newark hospitality is all about.