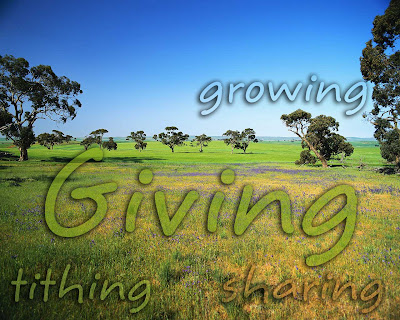 It's been quite a run lately. If Lent were actually a time of 'quiet reflection' for me, I might be looking forward to it. It's not. Oh, there are moments, but the liturgical Ferris Wheel just starts to gear up again and before I know it, it's Holy Week and we all know the joys that brings.

Added to the frenzy is the fact that last night was the first Vestry meeting of the new year and after our election and retreat. Three new members to get on board. And, a Very Full Agenda. I got home 'round about 11 last night. I did lounge a bit this morning, but pastoral calls and organizing for a Very Big Event on March 14 (more on this later) would not allow me to tarry long over my coffee.

I did have one thought that I managed to get written down.

There's a bit of a flap (and rightly so) over on HOB/D about the cut of funding in the national church budget for the MDGs. Oh, they did some financial smoke and mirrors, but most of us saw right through it.

The discussion called up a very powerful memory for me, which I share here. Hope it is helpful to you. If you are an Episcopalian and feel strongly about this, I urge you to contact the Bonnie Anderson, President of the House of Deputies, and let her know what you think.

Here are my thoughts on the matter, most of which made it to an e-mail to Ms. Anderson.

Like many others on this list, spoken and unspoken, I am stunned by the decision of the Executive Council regarding the funding of MDGs. I hope what I have to offer might be helpful to this discussion.


One of the best stewardship presentations I ever heard was from a Deacon who was the Treasurer of a local Baptist Church, a congregation which had a reputation for vital, life-giving ministry in the community, which included, among many, many wonderful services, a Cooperative Food Bank, a low-cost Pastoral Counseling program with a large component which dealt with domestic violence and addiction, an after school computer and music programs for kids, and a low-cost restaurant "The Promised Land" which not only served the poor and the hungry but provided jobs and training and an opportunity for social dining as a positive, healthy alternative to the local Burger King and MacDonalds.


She said that in her church, the first 10% of the income - 'the first fruits' - went to Mission / Outreach. Then, they funded the rest of the budget according to a priority their Board of Deacons had established. If they couldn't afford a church program or a staff person, that line item, in order of priority, was seriously reconsidered. The "sound" of that deficit was heard not as defeat or failure, but rather as a "call" to greater evangelism and ministry efforts and they redoubled their efforts in those areas - always to great effect.


I'll never forget what she said: "If you touch your tithe to the Lord (which is how she described the 'first fruit tithe') - you inflict a wound on the Body of Christ which may not be immediately visible, but from which you will never recover. You will send a shock wave to the rest of the Body that will begin to paralyze the other sources of income. You do damage to yourself, your community, your church, and insult the Lord who gave it all to you in the first place."


The 0.7% MDG line item is an integral part of our 'first fruit tithe' to God. We can choose to hear the fragility of our present economy as a call to cut expenses or a call to greater evangelism and ministry.


I certainly hope this decision will be seriously reconsidered.
Posted by Elizabeth Kaeton at 4:22 PM

Oh, for the love of the sweet Baby Jesus! Do we believe in a God of abundant blessing or not?