A little bit of Paradise in Lent 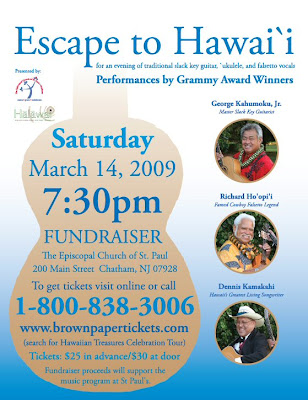 Proceeds from the concert will benefit St. Paul’s music program.

When grant funding to appear at Carnegie Hall, NY fell through for the tour, George Kahumoku, Jr. contacted his student and east–coast Hawaiian music performer Andy Wang seeking alternative venues. Wang jumped at the opportunity to present the Carnegie Hall bound program in his hometown.

The performance at St. Paul’s will be the only Hawaiian Treasures show in the tri-state area, featuring a rare east–coast appearance by famed cowboy falsetto living legend Richard Ho‘opi‘i.

Hawaiian slack key guitar, kī hō‘alu, is one of the world's great acoustic guitar traditions.Relatively unknown outside of Hawaii, slack key guitar is often confused with, and actually predates, the more well- known Hawaiian lap steel that developed in the late 1880s or 1890s. Slack key was developed by Hawaiian cowboys who "slacked" the strings of guitars brought by Mexican and Spanish cowboys hired by King Kamehameha III to teach Hawaiians better ranching methods.

Slack key is a finger-picked style, and the tradition continues to evolve from techniques and tunings handed down through the generations.

“Not only are we excited to present award- winning acoustic instrumentalists and vocalists to our community, we are truly privileged to share a unique, authentic cultural experience,” said Andy Wang, show organizer.

“People with connections to the islands will be transported back home. I hope that others will be as moved as I was at my first Hawaiian music performance — more than 15 years ago — by the program, including elements of mele (song), hula (dance), and story telling.”

George Kahumoku, Jr. is a master slack key guitarist and was also one of the album’s producers. There is plenty to celebrate after winning the Grammy three straight years for Best Hawaiian Music Album.

These three CDs are live recordings from the weekly show hosted by Kahumoku in Maui (www.slackkey.com). Last year’s release Treasures Of Hawaiian Slack Key Guitar features two other esteemed artists that will also be touring with Kahumoku.

Dennis Kamakahi is one of Hawaii’s most prolific composers, having written such famous Hawaiian standards as “Wahine ‘Ilikea,” “Pua Hone” and “Koke‘e.” At the age of 19, his rich voice and superlative guitar skills led him to be honored to replace the late Gabby Pahinui in the acclaimed band, The Sons of Hawaii. Now, after 40 years as a professional musician, he too can claim to be one of Hawaii’s most renowned artists.

Richard Ho‘opi‘i is a living legend of Hawaiian music and master of the traditional art form of Hawaiian falsetto. For many years, he performed with his brother Sol as the Ho‘opi‘i Brothers. He has received the National Endowment for the Arts’ Folk Heritage Fellowship, America’s highest honor for traditional artists. Charismatic on stage, his lively music, thick white hair and infectious smile make him one of Hawaii’s most recognizable musicians.

Tickets for the Saturday, March 14 show at 7:30 pm are $25 in advance and $30 at the door. Tickets are available at www.brownpapertickets.com (search for Hawaiian Treasures Celebration Tour) or by calling 800-838- 3006.

For additional information, please visit www.andywangmusic.com/treasures.
Posted by Elizabeth Kaeton at 8:36 AM

Oh - I have been to Hawaii many times and I do so love me some real Hawaiian music... the slack key guitar. Ahhh!

I wish I could make it down there, maybe I can. In any case it does sound wonderful!