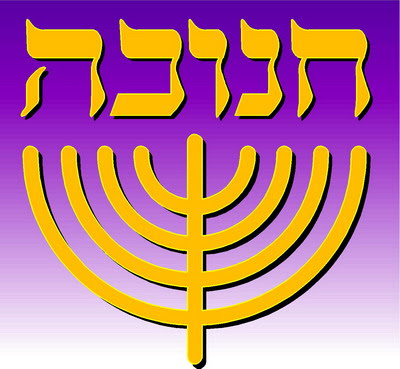 It's easy to forget, in the midst of these frenetic last days of Advent, that there are other lights, other excitement, other joy in other communities.

My friend Mariam celebrates Hanukkah and Christmas, but she celebrates Yeshuah's birthday in March, the time when some biblical historians believe Jesus was actually born.

I know. Not "in the bleak midwinter". More likely in Spring - when all new lambs are born.

Celebrating 'the light' in the midst of darkness is not a Christian idea. People have been doing that since the dawn of time - long before the dawn of religious systems which ritualized the celebration, each in their own way.

Jesus is our 'solstice'. He is our Maccabbean savior. He is our Light in the midst of the great darkness of the world.

There is also a political subtext to our celebration, just as there is in Hanukkah. If St. Matthew is anxious for us to know the ancestral line of Jesus, and Mark wants us to know that this, THIS is the Son of God as the prophets foretold, St. Luke takes great pains to put the birth of Jesus within the political context of the empire.


"In the fifteenth year of the reign of Tiberius Caesar, Pontius Pilate being governor of Judea, and Herod being the tetrarch of Galiee, and his brother Philip tetrarch of the region of Ityraea and Trachonitis, and Lysanias tetrarch of Abilene, in the high-priesthood of Annas and Caiahas . . ."


. . . the word of God, says St. Luke, came to John the Baptizer. Not any of the above. Not even the empire of the religious establishment.

In an essay written by Garret Keizer in this morning's Religion Dispatch, he writes:


Christmas has some of the same anti-imperial subtext—Julian the Apostate’s sad one-liner, “Pale Galilean, Thou Hast Conquered [the Roman Empire],” could work as a verse in “Silent Night” — but the message has a tough time getting through when Christmas itself has become so imperial. The pale Galilean may hold court in his manger, but Constantine reigns on Fifth Avenue and on the sound system of every Starbucks from one end of Broadway to the next.


It's an important point to remember, as unsettling as that may be.

Lest we forget, there's a war going on in Iraq, one gearing up in Afghanistan, and one always threatening to ignite in Iran, Korea and Palestine.

As we begin to round the corner and fast approach the fourth Sunday in Advent, Keizer raises many important questions for us to consider about what Hanukkah might teach us about living in empire. I encourage you to read the whole thing here.

Keizer gives us a word on which to meditate - "resist" - saying,


Dismantling imperial America would require a realization of the extent to which American democracy has been subordinated to so-called American interests, as defined by the moneyed interests now squatting in the civic temple. It would require a radical rededication to the rule of law and to the principle of human solidarity, according to which 3,000 Afghans killed as collateral damage weigh no less heavily than 3,000 Americans killed on September 11th.

What would be the result of such a rededication if not a foreign policy that looked more like a candelabrum than a conquistador’s torch? Still, the Maccabees had to rise up before the menorah could be lit. Whatever forms it takes, the imperial always calls forth the imperative: resist.

That is what the Afghans are doing, what they have always done, and what they will no doubt continue to do as long as the country has rocks. So much for statements based on history. Those based on religion usually start here: What must I do?


Heavy thoughts after we have just celebrated "Refreshment Sunday". Nevertheless, 'resist' is a word I'm taking to my heart this week, as the temptation to buy into the values of the empire become seemingly stronger than my will.

I'm following this little spark of intuition that resistance to empire is the energy required to find the deeper meaning of both Hanukkah and Christmas.

I have this sense, this hunch, this little sensation tickling the edges of my soul that this little spark may lead to a bonfire explosion of deep joy that is, at once, ancient and brand new - personal and yet universal.
Posted by Elizabeth Kaeton at 10:06 AM

I've always seen it that the purpose of empire is to rule and that usually means to be at the top of the food chain. The tool of empire is to control and that is done in a variety of ways, religion being one of them. To resist is to fight against the various forms of control whether they be religious, military, societal or psychological. How that is accomplished can be violent or non-violent and that is always the choice.

Why, yes, as a matter of fact, I am. Just not in the gynecological sense, thanks be to God!

By now Mary must have been feeling more than a little pregnant. I once opened a sermon with the words, 'By now Mary's water will have broken,' And talked about the stretch marks of the spirit.

Elizabeth -- for the first time it occurs to me that Joy is not necessarily comfortable.

@ Robert - I love it! I'd love to know the congregation's reaction.

@SusanKay - I've always been struck by the fact that sometimes, with some people, it's hard to tell if they're laughing or crying.

So Jesus was Che Guevara, only speaking Aramaic?

Oh this is so good... I get to so few blogs these days and I love when I find myself in the midst of something like this post.