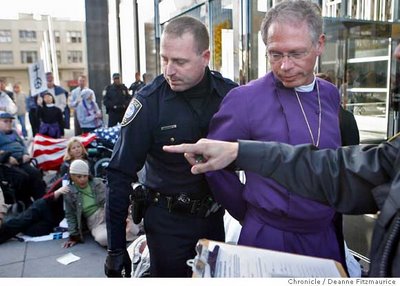 Andrus, carrying a shepherd's staff and singing "Down by the Riverside,'' was among about 200 protesters who had marched from Grace Cathedral on Nob Hill to join the weekly anti-war rally on Golden Gate Avenue near City Hall.

The bishop celebrated communion at the entrance plaza before Federal Protective Service officers began arresting protesters shortly after 2 p.m. for lying down and blocking the two main doors.

The officers passed Andrus in their first round of arrests because he was not positioned in front of the doors. After Andrus, in his purple robe, got up, moved a few steps and lay down again directly in front of the entrance, the officers returned and placed him in handcuffs -- while one said, "How are you?'' and shook the cleric's hand.

Protesters applauded, cheered and sang as Andrus was photographed by another officer and led inside the building.

"God is with all who have suffered in Iraq,'' the bishop said. "This war needs to be opposed. Even though there is widespread sentiment against the war, we need to continue to push for peace. There is good reason to believe this is an unjust war.''

Andrus became the eighth bishop of the 80-congregation Episcopal Diocese of California in July.

Eleven other protesters were arrested for blocking the door. All were cited and released. A half-dozen other people who lay down in front of the door got up and left when the crowd began to disperse and it was clear that the officers were all done arresting people.

"What do you have to do to get arrested in this town?' said Matt Cantor, in exasperation. "The war in Iraq is horrible, unthinkable, and we cannot stand by while children are dying.''

"Well, the bishop got arrested,'' said Cathy Lipscomb, another nonarrested door blocker. "That was the important thing."

Several hundred people crowded into the plaza for the rally and religious service, the biggest turnout for the protest and vigil that has been held weekly in front of the federal building for about five years.

In another anti-war protest Thursday, several dozen students at Stanford University drew chalk outlines representing the Iraq war dead at major locations around campus, including the library and post office.

I found some pictures here.

Thank you Rt. Rev. Marc Handley Andrus. Thank you for nurturing the true Spirit of Anglican Communion. Christ lives. God is still Speaking. You let Christ shine through you and it radiates warmth thousand of miles from you, here , here in the cold grey winter of the Milwaukee Diocese. Blessings in Christ.