World AIDS Day: When you have AIDS, every day is AIDS Day 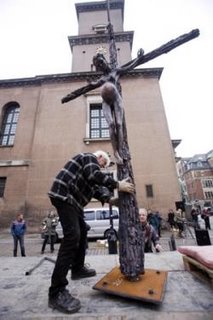 Jens Galschioet said the sculpture was meant as a protest against Christian fundamentalists and the idea that "God allows nothing but chastity and unprotected sex." He said he chose a pregnant teenager for his artwork "because they are the hardest hit by AIDS."

Galschioet received permission from city authorities to erect the statue, named "In the Name of God," outside the cathedral. The statue raised few eyebrows in the secular Danish capital. Even the clergy appeared unmoved.

"It's a good supplement to the crucifix we have inside the church," said Anders Gadegaard, the cathedral's dean.

Note: This was shamelessly taken from Mad Priest's Blog "Of Course, I could be wrong." Of course, he is not.

Posted by Elizabeth Kaeton at 8:21 AM

I haven't heard very much about the Danes trying to push abstinence-only education on the rest of the world ... perhaps the artist should have put the statue outside the White House.

Oh wait, he'd have been arrested, like Jim Wallis et al when they protested poverty outside Capitol Hill (I think it was there, anyway).