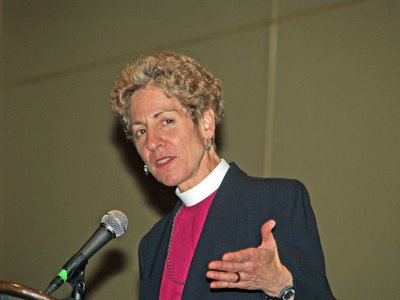 [ENS] The Episcopal Church's Presiding Bishop and the President of its House of Deputies both said on December 4 they deplore the action taken two days earlier by the Diocese of San Joaquin (http://sanjoaquin.anglican.org/), effectively repudiating its membership in the Episcopal Church.

Presiding Bishop Katharine Jefferts Schori said in a statement that she "laments" the move and is working with others to respond to "these extracanonical actions."

"Our task as the Episcopal Church is God's mission of reconciling the world, and actions such as this distract and detract from that mission," she said.

Jefferts Schori said in her statement (http://www.episcopalchurch.org/3577_80177_ENG_HTM.htm) that she also "deeply" laments the "pain, confusion, and suffering visited on loyal members of the Episcopal Church within the Diocese of San Joaquin," and wants them "to know of my prayers and the prayers of many, many others."

"I'll see your lamentation and raise you nine dioceses."

So they are in fact taking themselves out of the ECUSA while remaining connected to the Anglican Communion...hmmm.

Someone needs to explain this to a 62-year-old doofus who can't quite get the fixation on sex. How did I managed to get born in a post-Freudian world? I simply do not understand why any religious body has fixated itself on what people do privately, with their own bodies, on their own time.

The same way the right-wing radio jerks drag Bill Clinton into every conversation as the AntiChrist, so it seems Bishop Spong gets hauled into discussions of the moral degeneration of the Episcopal Church. In the one parish from which I actually resigned, people lumped him with the New Zealand Prayerbook and some church in Hoboken as (gasp) heretical. So I showed self-control by not asking "If it were not for heresy, what would you talk about?"

Bishop Robinson can now join Bishop Spong in the 9th circle of whatever Hell these people are concocting. Let them go. Let them go to Peter Akinola. Or let them take their entire flock into the RCC so they can find something wrong there, too.