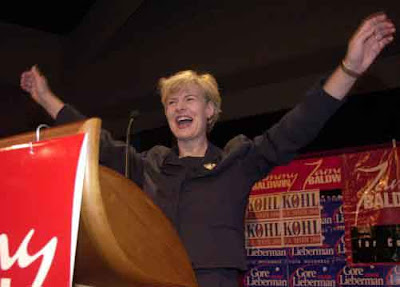 U.S. Rep. Tammy Baldwin, the only openly lesbian member of Congress, has been named an honorary co-chairwoman of President-elect Barack Obama's inauguration — days after Obama announced evangelical pastor Rick Warren, who supported California's ban on gay marriage, would give the inaugural invocation.

Debbie Mesloh, a spokeswoman for the inauguration, said she couldn't say whether criticism from gay rights groups over the Warren announcement contributed to the selection of Baldwin. But she said the co-chairs were picked based on "their service and what they've done for their country."

Jerilyn Goodman, a spokeswoman for Baldwin, said the Madison Democrat was asked to co-chair the inaugural "a few weeks ago," before the Warren controversy erupted.

Goodman said Baldwin would have no comment on Obama's pick of Warren to lead the invocation.

Baldwin is among 16 co-chairs, who include former Presidents Bill Clinton, George H.W. Bush and Jimmy Carter along with relatives of Obama and Vice President-elect Joe Biden.

In a statement, Baldwin said: "It's a great honor to be named an honorary co-chair of the presidential inauguration. Every inauguration holds special significance, but the swearing-in of Barack Obama as president marks a turning point in American history."

She later served as a co-chairwoman of a steering committee on gay and lesbian issues for Obama's general election campaign.

"We're very excited to have Wisconsin represented in this way," Mesloh said. She said Baldwin will "play an important role" on Inauguration Day, but specifics have not been worked out yet.
Posted by Elizabeth Kaeton at 2:12 PM