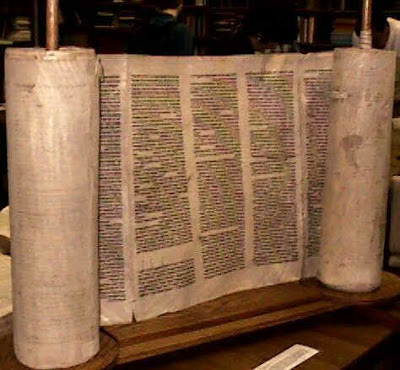 My dear friend, J. Michael Povey, pointed this out to me. The author is a friend of his, Pat Kaplan Andrews, who posted this on her blog, "Meditations" on December 11.

I, like him, think it superb. I trust you will, as well.

While you're lurking about the internet, consider a visit to Michael's Blog, "Povey Prattle". He's got some neat snaps of his cat posted.

I watched a wonderful PBS special about the making of the Torah. Some old scholarshp with illustrations and commentary made a colorful, even moving, review of Biblical history.

They showed pictures of stones with early Hebrew alphabet to pinpoint earliest date for writing around 1000 BCE (unless and until they discover older stones in the future). Cue brushes on sheepskin, historians in David's court. Then cue the Dead Sea Scrolls from (when?) 300 BCE marked by those scratchings.

Music and vague images of men in robes grabbing scrolls through fire portrayed the Babylonian exile as I always pictured it-- "Grab the scrolls, grab the scrolls!"--and helped me understand Sabbath better, the priestly construction of a Temple in Time.
Beautiful. Those priests were geniuses and all at a time when everything was over: the Covenant with David, the Holy Temple, the Promised Land, all just--gone. The exiles had no way to predict Cyrus would conquer Babylon and let them go home; they had only hopeful gorgeous prophesies of Return; and they believed them.

One thrilling find: Archaeologists have dug up numerous little fertility goddesses and other pagan statuettes from the time before the 6th-century BCE Babylonian Exile. From the layers since the Return under Cyrus of Persia, they have found not a one. Evidence from absence that the prophets were heeded.

Even the most academic, secular retelling cannot get around the Lord. When Hebrews escaping Egypt entered Canaan around 13th century BCE, they blended with the locals, who adopted the newcomers' Exodus story as their own history (a kind of reversal of the way we later immigrants retell the Pilgrim story in America). It was almost in embarrassment that TV scholars acknowledged that the runaway slaves from Egypt "had a divine experience." They sounded like Toad in American Graffitti mumbling, "and a pint of Old Harper's..." trying to mix it in with his order of a comb and beef jerky.

But like the clerk in Toad's store, I God's child, caught the main point ("ID, please"). I drew deeply from the divine Word as I watched the scholars coming to grips with the historiography and the archaeology--e.g., a big royal compound has been excavated that could be David's palace! (A lot of building and writing seemed to start up all at once, not to mention the music of Psalms!) This show was my idea of thrills.

And also food for reflection:

We also stand on the brink of sincere peril. If apocalypse descends to us, as it did then to Judah, grab the scrolls, throw out the astartes, remember the divine experience, and hold fast to the promises. A new heaven and a new earth is being created. This message I took from my Advent watching.
Posted by Elizabeth Kaeton at 4:54 PM