Mickey works for justice - but not a living wage 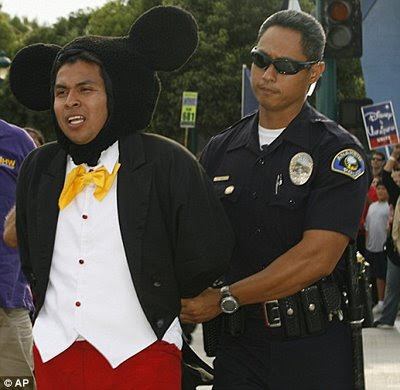 Actually, this picture was at a protest rally last November. But, he's planning to do it again next Tuesday. And, he's asking clergy to help.

"Disney Be Faithful" is an organization that represents thousands of workers at Disney World here in Anaheim. You know. "The Happiest Place on Earth."

Here's some information which some of the organizers handed out this morning in front of the Convention Center.

Disney is Faithful to its Shareholders:

Disney, Be Faithful to your Employees:

• Disney wants to take away full-time jobs and forcing many of us into “casual regular” positions with no health insurance at all, no vacation, and less than full rights.

The very polite, articulate young man I spoke with this morning told me that a coalition of three organizations - The Episcopal Network for Economic Justice, Clergy and Laity United for Economic Justice and Disneyland Hotel Workers - are going to stage a

Prayer Vigil and March
Tuesday, July 14
4:30 PM
In front of the Convention Center on Katella Ave.
He asked me if I would be one of the clergy to "anoint" some of the workers for the work of justice.

You know I'm going to be there.

If you are in Anaheim, I hope you'll join us.

If you are not, I hope you'll be with us in spirit and prayer.

"The people. United. Will NEVER be defeated. "
Posted by Elizabeth Kaeton at 7:21 PM

I have never like Disney. Too many corrupted stories. Still, I will be with the workers in prayer on the 14th ...hmmm, Bastille Day. So, what happened with B033 today??

I signed their petition too --I'll be there Elizabeth.

PEople who work for the Mouse generally don't have much good to say about it....