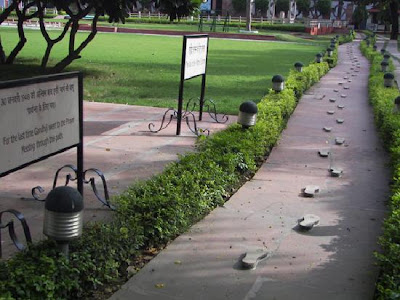 Note: The following was written for Sunday's edition of "Issues," a publication of The Consultation. (Click on "Issues")

In New Delhi, there is a fitting memorial to Gandhi – the man who walked all over India for justice. It marks the path of his last steps, before he was assassinated.

Just for a giggle, I brought Ms. Conroy’s pedometer to Anaheim. It’s not a ‘professional’ one. It’s just something she picked up a while back when she was trying to get into shape.

I know that General Convention requires a great deal of walking – I’ve been attending these things for a number of years and my tired body remembered instantly – but I was curious to know just how much walking I do.

So, I put on the pedometer and here’s what I found.

Keep in mind that, for a person my size, 2, 000 steps equals approximately one mile.

Friday – stopped wearing it. I don’t want to know anymore.

I suspect Gandhi never counted his steps. He just kept walking. He walked all over India – an area much larger than all the General Conventions I’ve ever attended.

Still, he kept walking for justice.

Jesus walked all over Israel – back and forth, going to where the people were. Being with the people who needed to hear the Good News. Teaching. Telling stories. Bringing healing and hope. Confronting the powers and principalities in the name of justice and peace, and never counting the cost – much less the steps.

It’s humbling to remember that as I schlep back and forth and forth and back from hotel to convention center and from the HOD to the HOB to various hearings and committee meetings.

Who would have guessed that walking for justice can also be good for your body?
Posted by Elizabeth Kaeton at 3:14 AM

Thank you, Elizabeth for your tireless walk for justice. It's appreciated more than you can know.

I'm glad it did. Good to hear from you, Riley.