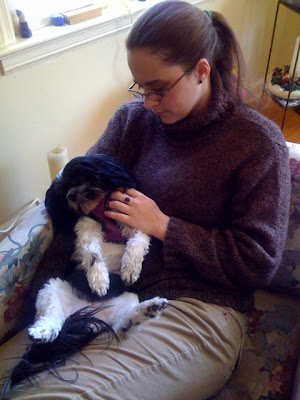 Today is the nativity of our youngest daughter, Mia.

Born three weeks early on Mother's Day, she has been a joy to our hearts when she's not been a source of challenge to our expectations for her life.

It began with her birth. Ms. Conroy and I had a deal: If this child was born with dark hair, she would be named 'Maria" after my grandmother who had just died. If she was born with light hair, she would be named 'Hannah' because Ms. Conroy was very much into Biblical names, but this one held special magic for her because "Hannah" is a palindrome - a word (or sentence) that reads the same backwards or forwards. (Her favorite palendrome sentence is 'Women Understand Men; Few Men Understand Women'.)

Mia was born with a full head of jet black hair - which all fell out at age 6 weeks and grew back in sandy blond with glorious golden highlights.

She was also a peanut when she was born - six pounds two ounces - so we joked that she was too tiny even for the fullness of her name. She was baptized Maria, but soon became "Mia." Because she 'squeaked' before she ever really let out a good cry, her family name of endearment soon became "Mousie."

She began using single words at seven months old ("Mama"), and by the time she was nine months old, she was talking in full sentences ("I want Mama"), but she didn't walk until she was 18 months old. She didn't have to. As the youngest of six, with another six foster kids hanging about, all she had to do to get from here to there was to lift up her hands, twinkle her eyes, smile coyly and say, "Up!" Someone would be right there in half a heartbeat.

At age 25, she earned a Master's Degree in Elementary Education and an International Certificate as a Montessori Educator,but does not have her High School Diploma.

She is currently developing her artistic self through photography and acrylic paint and, most recently, through pottery. She's really good, and that's not just a mother's pride talking. Okay, so maybe just a little bit, but she's THAT good. Honest.

It's a joy to watch her continually open and unfold to deeper awarenesses of her self.

She is wise beyond her years and her humor tends to be just a tad offbeat but her giggle still comes from the middle of the middle of her middle wherein lies the deepest truths she knows about herself and the world and God.

Happy Birthday, Mousie. We love you. Whatever would we do without you in our lives?
Posted by Elizabeth Kaeton at 10:21 AM

Wow! How lucky to have her and t'oher way about for her to have had you two. Happy birthday to Mia.

Our best to Mia for a Glorious Birthday!

Blessings to Mia from one who shares the same day... it's a great time of year for a birthday ;)

So it sounds like you got over Mia's golden retriever eating all the greenbacks in your wallet that time and scattering the bits like green confetti all over the house.

Happy Birthday, Mia! (And many, many more!)

Oh, no I haven't, Suze. You don't see any more Goldens around here, do you? Nope. Just wee ones who yap up a storm but don't eat money out of my wallet. ;~)

As for the Golden Retriever tale, does it help that I have never been forgiven for putting the tadpoles I found in the ditch when I was 10 years old in my mom's fish tank? How did I know that they would eat the eyeballs off the Black Moors?