Mutterings over the graves of soldiers 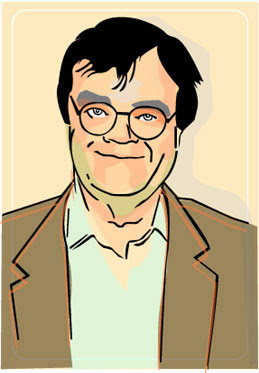 Mutterings over the graves of soldiers

On Memorial Day we'll hear about men who gave their lives for their country, but many lives were not given, they were taken, and taken stupidly and carelessly.

May. 21, 2008 | The Current Occupant tossed Nazis into a speech last week, something he rarely does since it only reminds people of Dick Cheney. He likened those who would negotiate with terrorists to those who tried to appease the Nazis, an awkward comparison, since Nazis were self-defined and wore the swastika proudly, and terrorists are anybody we nominate to be terrorists, who may include terrorists, people who know terrorists, people named Terry, or people with wrists. One reason Guantánamo is kept top-secret is so you and I won't know how many innocent people have been locked up there and how little the bureaucracy cares about innocence, which might remind people of the Nazis.

The Nazis have served us well as an embodiment of evil even after they're all dead and buried, thanks to wonderful movies with cruel men with bad skin and guttural voices -- and the word itself, which has an ominous buzz to it, unlike the gentle "communist," a cousin to "communion" and "community," though when it comes to outright hardcore evil, communism outdid the Third Reich hands down. Stalin was the most murderous man in the history of the world, having had a larger victim pool to work with, and yet "Stalinist" is not the epithet it should be.

That's because communism was exploited for short-term political advantage after World War II by Richard Nixon and other weasels of the right, much the way "terrorist" is today, to scare people into acceding to unprecedented secrecy and concentration of power and freedom of bureaucrats from any accountability whatsoever. Spooky old hammerhead politicians found anti-communism to be wonderfully profitable and they rode that horse for years and cheapened the language.

The war on terror, to most people, is a lame joke, and Republicans who've been embedded in Washington too long are now finding that the word "terrorism" has lost its tread. This multitrillion-dollar war is going to wind down, one way or another. The Occupant will hand it off to the next president, who can then negotiate with people who know people who know terrorists and work out a way to extricate our people from the desert.

I got a letter from a U.S. Marine in Fallujah ("trapped in this heat and smoke ... running in circles that won't change anything") who, though a "right-wing social conservative," asks, "Where are the protests from my contemporaries in America's colleges? Why do I not detect an appropriate sense of urgency from our citizens and elected officials?"

It's only May. You will see more urgency from elected officials as November nears. Sen. McCain is now talking about withdrawal except of course he wants to call it "victory," and Republicans up for reelection are learning to sound a little more thoughtful and even skeptical about the war. In Minnesota, a man is up for reelection who sat on a Senate committee with oversight responsibility for the rebuilding effort in Iraq and who showed no keen interest in the billions of dollars disappearing down rat holes. He is now starting to recover some memory.

Meanwhile it's almost Memorial Day and here is a vet on television talking hopefully about his dream of making a good life who has been horribly burned and grafted back together, his head looks like a candle stub with a mouth and blinking eyes. Your heart goes out to the brave young man. And what choice does he have other than to be brave? It's either that or the life of a potato. But who did this to him?

On Memorial Day we'll hear about men who gave their lives for their country, but many lives were not given, they were taken, and taken stupidly and carelessly. And there has been great public piety about those men and their "sacrifice" on the part of politicians who blithely sacrificed them.

Back in 2001, McCain said that a person couldn't talk policy to the Current Occupant for more than 10 minutes and then his mind wandered and he was anxious to talk about baseball. His impatience with detail was apparently a factor in the disastrous move to disband the Iraqi army. I hope he gets to spend some time in his presidential library in Dallas and catch up on what he missed out on.

I have done many a service at Arlington Cemetary. It stirs the patriotic heart of everyone. But with each one, one must look around and say why?

The problem with the present "Occupancy" is that few are getting any answer to that question. And none of the candidates for president are asking the question either. That is even sadder.

I was moved by this piece when I saw it; I'm glad someone else noticed.

And muthah+, I am frustrated with those who don't DEMAND that the present Occupancy answer the damn question.

I put the question! Who will demand answers? Point of order! Point of justice!