Brick of the Day 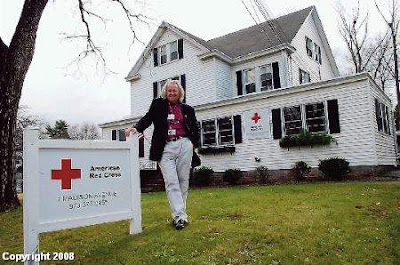 I am thankful for a wonderful article on a member of our congregation, Bill Schatzabel, in today's 'Daily Record'

Schatzabel's Red Cross training also came into play last January, when a fellow parishioner at the Episcopal Church of St. Paul in Chatham was non-responsive during Mass.

"The rector, Elizabeth (Kaeton), had just finished her sermon during the 8 a.m. Mass. Tom asked if I could look at his father, who was slumped over in the pew. He was gray and cold to the touch and was not breathing. Two people called 9-1-1, and three of us picked him to move him to the center aisle. In the process of moving him, we probably compressed his lungs and he gasped, so I knew his heart was beating again.

"With the paramedics on the way, I treated him for shock. So we raised his legs onto a stack of Bibles and winter coats, which got the blood flowing back to the center of the body and warmed him up. He had been bleeding internally, but three weeks later, returned to Mass.

"Interestingly, I had just given a class to the Sunday school teachers two weeks prior. We do our best to prepare people, but you cannot imagine the feeling that you get to see the training you got and then you taught someone else gets used right in front of you."

Bill is also quite a poet. Check out his poetry blog here
.

I am deeply grateful for his membership at St. Paul's.

As we prepare for Thanksgiving, let's all give Bill a round of applause.
Posted by Elizabeth Kaeton at 9:27 PM

Bill is indeed a brick.

Have a wonderful holiday Elizabeth.