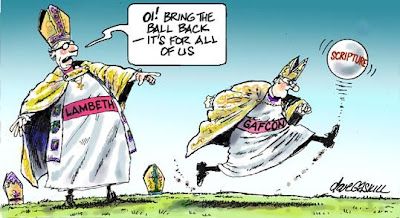 First this from The Living Church:

The annual synod of the Diocese of Sydney has overwhelmingly approved a resolution restating its support for diaconal and lay presidency at Holy Communion.

No further action is required for deacons to begin celebrating the Eucharist, according to the Rt. Rev. Glenn Davies, Bishop of North Sydney and sponsor of the resolution. Writing an opinion piece for the diocesan newspaper, Bishop Davis added that even though the resolution also makes it permissible for lay persons to administer communion, they would need to be licensed by Archbishop Peter Jensen to do so in a service of public worship. Archbishop Jensen has previously said he is unwilling to do so.

During debate of the resolution on Oct. 20, a number of amendments designed to weaken its impact were proposed. Each was defeated, according to information published on the diocesan website. The Diocese of Sydney is a member of the Anglican Church of Australia.

The most serious challenge to passage of the resolution came from a priest who had attended the Global Anglican Future Conference (GAFCON) last summer and said approval could affect the diocese’s relationship with GAFCON bishops. The approved resolution includes a provision to send each GAFCON bishop a copy of a book published by the Anglican Church League explaining the theological rationale for lay presidency.

Then, THIS, from Peter Toon:

GAFCON & the Bishops & Diocese of Sydney!

In great sadness and pain for the Anglican Family, I write this tractate. You may care to read the news-item at the end first:

If GAFCON truly is walking in the biblical, historic Anglican Way;

If GAFCON truly is committed to Anglican, Reformed Catholicism and not to a generic, popular Evangelicalism in Anglican style;

If GAFCON truly is committed to the full and final authority of the Holy Scriptures, and resting on them is also bound to the content and teaching of the classic FORMULARIES of the Anglican Way—The BCP, Ordinal and Thirty-Nine Articles of Religion;

If GAFCON is still really committed to the powerful dedication made in a very public way at Jerusalem in June 2008;

And if GAFCON is still critical of the Archbishop of Canterbury and his advisors for their failure to be obedient to the Gospel and its teaching of Morals;

THEN, what the Diocese of Sydney has recently re-affirmed and confirmed as its public doctrine stands in total opposition to the doctrinal and public stance of GAFCON . This innovation in doctrine by Sydney is to teach and allow persons, who are not ordained as presbyters (priests), to celebrate the Eucharist and preside at the Order of Holy Communion.

My earnest suggestion to the leadership of GAFCON is this:

After appropriate warning, the Council of Primates of GAFCON should expel the Bishops and Diocese of Sydney immediately: by this action GAFCON will maintain its committed to the biblical, classic Anglican Way and will show that it does take discipline (a mark of the true church) seriously.

If GAFCON does nothing and allows the Diocese of Sydney, with its innovatory doctrine, and pride in that innovation, to remain as a full member, then GAFCON will become, and will be seen by thousands, as merely and only an international, Evangelical Anglican Group— with no serious claims to a serious catholic ecclesiology and historic Ministry, and no real opportunity or intention to set a godly example to the whole Anglican Communion of Churches.

You missed the point, my dear man: The Diocese of Sydney would rather have laity and deacons who are men preside at Eucharist then allow "girl cooties" at the altar.

There has never a clearer depiction of the interconnection between sexism and heterosexism. However, as this recent development with GAFCON is also clearly demonstrating, these "social diseases" also carry with them the seeds of self-destruction.

Or, as my grandmother used to say, "Dead wood always splinters."
Posted by Elizabeth Kaeton at 10:15 PM

Not quite! Sydney will allow women to be "lay presidents" or vocational deacons. The line where "No Girls" appears is at the level of paying gigs that can lead to episcopal elections. It is not girl cooties they are worried about, it is competent competition.

As I noted in my blog on the Sydney decision "Women can consecrate as long as women cannot be consecrated."

Jensen et al are all about power and money. It is amusing that Fr. Toon finally noticed!

Did not this Peter Toon bring down the wrath of the GAFCON Primates upon himself once already?

I have a vague memory of him questioning one of their actions previously and publishing it on a website without their "permission." He was put in his place by Big Pete of Abuja personally, Toon only being a theologian and not a bishop or primate!