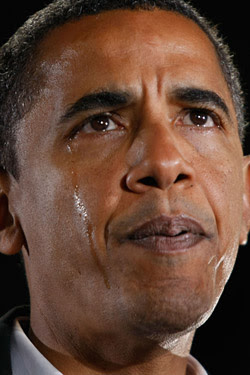 Doug writes: Here's a pic of Obama in NC today, when speaking of his grandmother, It is the first time I have seen him shed tears on the campaign trail.

After he stopped speaking about her, he took a handkerchief from his pocket, wiped the tears & went on with his speech.

Thanks, Doug, for sending this snap.

My grandmother always said that there's no man more courageous than the one who has the courage to cry, and there is no man so tall as the one who will stoop to talk to a child.

Barack Obama is that man.
Posted by Elizabeth Kaeton at 9:49 PM