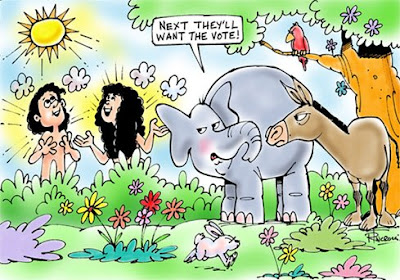 I was keenly aware that I was participating in history today.

Yes, of course, I voted for Obama, and, in two instances, voted for Republican candidates I thought were better, but that's not what I mean.

The great diversity offered by this ticket, on both sides of the political aisle, offered a snapshot of America in 2008 - it's conflict and commonality, it's height and its depth, its hopes and its dreams, its reality and its possibility.

God knows, I'm no historian, but you know, I can't think of a time, an historical context, when an electoral ballot offered such diversity in terms of age, gender and political platform.

Of course, I'm really, really sad that the woman on the ticket isn't a woman of whom I can be proud. Indeed, I'm really, really ashamed that Sarah Palin actually considers herself qualified to be two chest clutches away from the Presidency - and even more ashamed that there are women who will vote for her because 'she's a working mom and she knows what my life is like'.

No she doesn't, honey. She doesn't have a clue. Besides which, I hate to tell you this, but that's not what democracy is all about. All you are proving is how out of touch the administration of the last eight years have been - which is precisely why there is a need to vote for change. My goodness, even McCain and Palin acknowledged and, indeed, celebrated that fact.

Okay. I'll stop now. I didn't think my anxiety was that high, but apparently, it is.

The thing I really want to celebrate, in these last few hours before the polls close and the predictions begin, is to focus on the historic nature of this election.

It is historic not only in terms of the candidates but in the sheer numbers of people who will turn out to vote.

It is historic because when democracy works best when people participate in the election process. The fact that this will be an election in which record numbers of people turning out to vote is a very, very hopeful sign.

It is historic because people who lived with people who were not allowed to vote in the "land of the free and the home of the brave" voted today.

It is historic because people who have never voted before will be motivated to vote for the first time in their adult lives.

It is historic because the polls are showing that people who had traditionally voted will not vote because they are not invested in their candidate (see my previous post on my own Republican son-in-law).

It is historic because there is the kind of excitement and passion about voting we haven't seen since Kennedy was elected.

In the anxiety and excitement that is part of the "electoral stew" of this night, no matter the outcome, let us not dismiss the significance of this night.
Posted by Elizabeth Kaeton at 5:48 PM

Uh huh. Ain't it grand? What a great election (no matter how it turns out)! God bless you, E.

Congratulations. To us all!