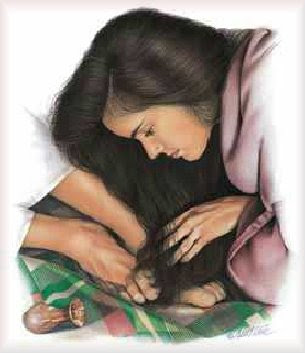 As I write this, we are in the midst of a rain storm, complete with thunder and lightening. It seems appropriate, somehow, in a Cecil B. DeMille's sort of way, for Monday in Holy Week.

A portent of things to come. Setting the stage for the drama that is about to unfold.

The gospel lesson for today is John 12:1-11. Jesus is in Bethany, at the home of Lazarus, whom he had raised from the dead. There is a festive party going on - a dinner in his honor. Mary served and Lazarus was one of those at table with him.

It is Mary of Bethany, John tells us, who takes an alabaster jar filled with a pound of perfume made of pure nard and anoints Jesus, wiping his feet with her hair.

I've never been certain what it was, exactly, that annoyed Judas about this. He says it is because of the waste, the lavish waste of costly perfume (300 denari, we are told), which could have been used for the poor.

John thinks that it is because Judas was a thief, but I think there was something about the sensuality of Mary's act that disturbed Judas. She displays the kind of awkward, lavish, wasteful love that lovers display with each other. It is a moment of intense intimacy that is made public.

This is beyond the bounds of respectability. How embarrassing for Judas!

As if raising Lazarus from the dead weren't enough to have already caused a stir! Well, that, and he did it on the Sabbath, when everyone knows that no work - even the work of miracles - is to be performed.

In the mind of Judas, this was the final straw. Jesus has ceased to become an asset to the cause Judas thought they were working toward. Jesus is now a liability.

You can almost hear the thunder and lightening in his heart.

Jesus says, "Leave her alone. She bought it so that she might keep it for the day of my burial. You always have the poor with you, but you do not always have me."

Jesus is at the party, but his face is already set toward Jerusalem.

The Religious Leaders have already started to plan to put him to his death. They are jealous because some of the people are leaving their synagogues and joining Jesus. Judas is jealous because of Mary's lavish display of love for Jesus.

Jesus is asking us for greater intimacy - the kind that pushes us beyond the bounds of respectability and that which is "meet, right, and proper so to do." The kind of intimacy that makes others jealous.

The storm clouds are gathering. Jealousy is like that - dark clouds which rumble and flash and occasionally burst open with rain.

It is six days before the Passover. All of the intimacy stored in the alabaster jars of our hearts is being cracked open for the anointing that is to come.

It is six days before the Passover. In the midst of the common stuff of our lives - dinner with friends, intimacy with each other, petty jealousies, questionable judgments and serious disagreements - let us join with with Mary and throw caution into the winds of the gathering storm.

Let us open the alabaster jars of our lives and find there the lavishness of intimacy - the wastefulness of love - which Jesus stirs in our hearts.
Posted by Elizabeth Kaeton at 8:22 AM

Nothing more to say, but Amen!