Strike Two in CNY: You can't take it with you. 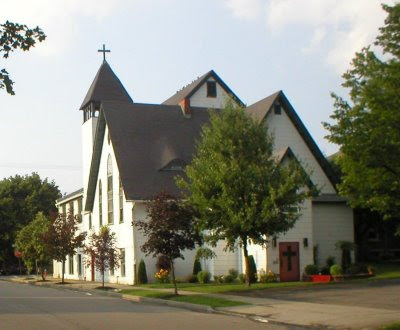 CENTRAL NEW YORK:
Departing parishioners not entitled to bequest
Diocese can investigate property accounting
By Mary Frances Schjonberg, April 28, 2009
[Episcopal News Service]A New York state trial court justice has ruled that members of Church of the Good Shepherd in Binghamton who left the Episcopal Church over theological differences are not entitled to keep a 1986 bequest of jewels and money.

Justice Ferris D. Lebous had ruled in January that Good Shepherd's property had been held in trust for the Diocese of Central New York and the entire Episcopal Church. The details of those rulings are available here. This part of the case dealt with a trust.

In his earlier ruling, Lebous had required the departing members to provide an accounting of the status of parish property. The diocese told the justice that some known property, including stock shares, was not produced. The justice found that no income had been flowing into the parish since April 2008.

Lebous found that "the parish was doing everything it could to spend down the assets, divert new income, and perhaps actively interfere with the diocese's right of ownership." He ruled that the diocese "has every right to conduct an investigation into the income and property of Good Shepherd."

The justice told the treasurer of the breakaway congregation and the Rev. Matthew Kennedy, the rector, that the investigation would begin with them being questioned within 45 days about what they had done with other church property.

“We are glad to know the judge was able to uphold how the church understands its own polity," Bishop Gladstone "Skip" Adams of Central New York told ENS in an emailed statement. "Although we are saddened by all that has occurred, we are glad it is moving towards final resolution in order that we may place all of our energy on our central work of the good news of the Gospel of Christ. We also appreciate the court’s expression of concern regarding Good Shepherd’s accounting, both financial and of other items, and its directive for further questioning into the usage of such funds."

Lebous had been asked to rule on the ownership of a gift that a former clerk of the Good Shepherd vestry, Robert Branan, made in his will. He left $1,500 "together with all my diamond, ruby and opal rings for the purpose of creating a chalice and paten." The jewels were to be set into the vessels.

In addition, 25% of Branan's remaining estate went to a parish memorial fund. Branan put the remaining 75 percent in a trust for two women and provided that the proceeds of the trust to go to the parish upon the death of both.

Branan also specified in his will that if Good Shepherd parish ceases to exist or merges with another parish the entire bequest would go to Christ Church, the oldest Episcopal Church in Binghamton.

Good Shepherd told Lebous that Good Shepherd still exists even though the majority of its members and leadership have disaffiliated with the Episcopal Church.

"While Good Shepherd may have abandoned the Episcopal faith, Mr. Branan never did, and his intent was clearly to benefit a local Episcopal church," the justice wrote. He added that there is "simply no basis on which to find that Mr. Branan would want his money to go to those former members of the Church of the Good Shepherd that abandoned the faith that he, apparently, held so dear."

-- The Rev. Mary Frances Schjonberg is national correspondent for the Episcopal News Service.
Posted by Elizabeth Kaeton at 8:25 PM

Allow 45 days to talk to them? About stolen/missing property? That's strange.... this very sad situation becomes sadder and sadderer...

From "make a chalice and paten out of them to "I'm keeping them because it's very clear to me he maant "do something for the local church?""

Now that is quite a stretch!

The 45 days is a fairly common discovery period in NYS court settings. Justice Lebous is basicly telling the folks to go home and dig through all the boxes and bins they hauled out of Good Shepherd and took off to their new digs at the former Church, Rectory and School of St. Andrew's RC (btw their new earthly home).

They'll also have time to review the records of the Bank Accounts of the St. Matthias Fund to see if any errors were made in deposits.

Margaret, I suspect - and it's only a hunch - that the judge is giving them time to 'make it right'. I suspect he suspects what I suspect - that they are arrogant (and foolish) enough to believe that the judge would decide for them, and if he didn't, then there would be less left for 'the enemy' (CNY). I'm sure they never - not in a million years - expected that they'd be held in account. That's what THEY do to others - how DARE any one hold THEM accountable.

Kirke - are we really surprised? That's exactly what they do with scripture - take a Guidebook on Cosmic Love and stretch it so that it becomes one of hate.

Yah --45 more days.... Better perhaps than holding the perpetrators in custody and getting a search warrant to find the missing property and records? (not.)

I mean, the man has stated that he wants to destroy TEC, and I am sure that would include the resources of this parish. Does no one take him seriously?

No, dear Elizabeth, I'm not surprised. But it sure must be nice to stretch the truth that far and feel perfectly okay about it!