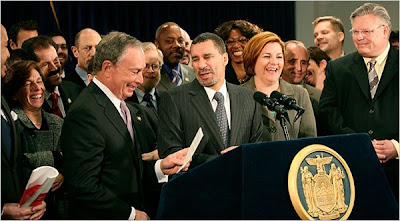 This was just posted in this morning's NY Times

Throwing the weight of his office behind legislation that still faces considerable obstacles in Albany, Mr. Paterson said he would leverage the personal relationships he developed over two decades in the State Senate to see the bill voted on — and passed. The vote is expected to turn on the thinnest of margins in the Senate, and some advocates say Mr. Paterson’s direct involvement could prove pivotal.

His emotional investment in the issue was on display Thursday in a 15-minute speech that placed gay marriage in the historical context of slavery, disenfranchisement of women and shunning the disabled. “We have all known the wrath of discrimination,” said Mr. Paterson, New York’s first black governor. “We have all felt the pain and the insult of hatred. This is why we are all standing here today.”

Well, what can I say?

The unfortunate part is that he is a profoundly unpopular governor. But then he's got nothing to lose (politically)by taking on an issue that might be seen as politically dangerous and everything to gain.

My hope and prayer is that it will pass and my representatives will be hearing from me.

Living in the land of Lincoln and his utterly unworthy successors I have no idea -- does the bill have a chance? I hope NY has some legislators who actually think.