Albany: "We CAN Discriminate!" 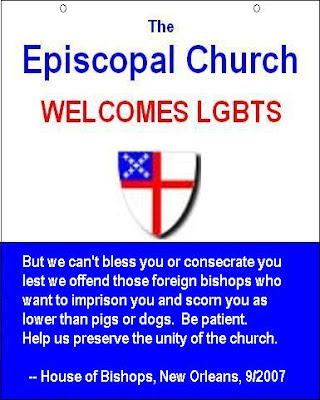 Taken from OPENLY EPISCOPAL - A new Blog of Albany Via Media.

Diocese Says: "We Can Discriminate"

The Rev. Glen Michaels from Trinity Church, Plattsburg, has provided us with an interesting exchange of emails regarding his inquiry to the Diocese of Albany about a possible candidate for ordination. The candidate happened to be a partnered gay man.

Michaels+ was mistakenly copied on an exchange of emails between the Rev. Peter
Schofield and The Rev. Robert Haskell (both of the Diocesan Commission on Ministry) relative to his inquiry. The Rev. Michaels has given us permission to post his notes and the related email exchange:

Dr. Bones & Openly Episcopal,
Our AM readers may want to see how the Diocese treats certain of those in this Diocese who believe they may be called to Holy Orders. Canon Haskell's response to Fr. Schofield below was inadvertently sent to me after I had inquired regarding a member of my parish.

Say... it might even work to exclude people of color and all other heterodox undesirable who hold the radical notion that in Christ there is no longer Jew or Greek, slave or canfree, male or female....
(The Rev.) Glen Michaels, Priest Associate, Trinity Church, Plattsburgh, NY
....................
The email exchange alluded to is given below:

I have an individual in my parish who I believe has a call to Holy Orders and have met with him to discuss his vocation. He is interested in further discernment. Does the Commission on Ministry have a blanket rule, either by formal rule or de facto, against accepting gay men in civil unions? If not, does the Commission have a working arrangement with another diocese to whom it will refer such persons?

We cannot state we have a rule against accepting gay men or women, because the canons of the Episcopal Church say that we cannot discriminate against people in the ordination process based on their sexual orientation.

What we can do is discriminate against people who teach that sex outside the marriage of one man and one woman is acceptable. We want people who have historically orthodox views on sex and marriage.

However, I would ask you not to reply to Fr. Michaels yet. I think Bishop Love should have a chance to think about how we handle this. I am copying him with this email.
-Bob

I am disappointed that you have chosen not to respond - other than accidentally (see Canon Haskell's remarks) to my query, made more than 3 weeks ago, about a member of my parish whom I believe has a call to Holy Orders. I sent a follow-up email to Fr. Schofield on March 31. The meeting on Holy Orders is this Saturday. But still no reply. I will communicate Canon Haskell's responses to my parishioner and others.

Subsequent to this, Michaels+ did receive a reply from the Bishop. His reply is printed below:

Thank you for your email concerning a parishioner at Trinity Church, Plattsburgh, who is interested in Holy Orders. The policy in the Diocese of Albany is that for a person to be eligible to be considered for the ordination process, he or she must live within the covenant of marriage between one man and one woman, or be celibate and abstinent.

Faithfully Yours in Christ,
+Bill

I leave the last word to The Rev. Glen Michaels:

As much as I disagree with Bishop Love's theological stance on homosexuality, I believe that he does have the right to reject candidates for Holy Orders who hold theological positions which he believes to be outside the bounds of acceptability within the Episcopal Church.

However, it is an act of hubris for the Bishop to deny that there are many other bishops in good standing within the Episcopal Church who find such positions acceptable, and would welcome otherwise qualified candidates for ordained ministry.

As a pastoral matter, I believe we need to assist such persons in their discernment by connecting them with other Episcopal mentors. Bishop Love's non-response to my suggestion is unfortunately indicative of his pastoral care toward such persons.
Blessings,

Glen Michaels
(who prefers to follow Jesus' injunction to call no man father except our Father in Heaven)
Posted by Elizabeth Kaeton at 7:31 PM

So much for national canons in Title III against discrimination against sexual orientation or marital status...

It is even on the Q&A profile for the Texas Bishop Coadjutors election coming up later this month, with most responses leaving the canon as is, while even the most progressive voices on the ballot remain muted because they fear they cannot get elected if they speak too loudly on the "issue."

One hopes the canon knows that this willcome up should he ever seek to be affirmed by the church as a bishop. This guy is now official not a candidate for bishop, except in Nigeria.

Therefore this restricts partnered gay, partnered (but unmarried) straights, polygamists (married or not). So it again is about behavior rather than orientation, and its up to GC to make the change.

I'm such a Luddite that I think it should apply to un-annulled divorced ordination seekers.

I don't think that sort of thing is too unusual. This is the kind of church you have. This is TEC. It may not be too clear to those of you in Newark or Los Angeles but this is YOUR church. And, just so everybody knows, women don't have it too good either.