Moving toward the light 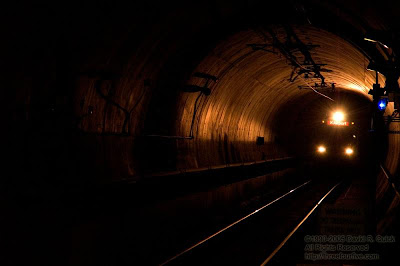 As the old saying goes, I can see the light at the end of the tunnel and, unlike the above picture, it's not an oncoming train.

I spent an hour yesterday with my second reader on the fourth draft of my doctoral paper. I've got probably another four or five hours of research and revision to do - nothing major, just some formatting, and a few flourishes and minor expansions of some of my points.

As my advisor said, "You need to write this as 'Pastoral Care and Counseling' for those who are completely unfamiliar with the subject." Given that this has to do with the spiritual journey of LGBT people, the first of its kind on the doctoral shelves of the theological shelves at the Drew Library, he suspects it will become a reference for all sorts of folk.

Orals are on Friday at 11 AM. I'll be studying all this week.

The faculty votes on graduation and admission to doctoral status on May 2nd.

The final draft, ready for copyright and reproduction on bound library copies is due on May 9th.

Graduation is scheduled for May 17th.

Prayers are fervently solicited and deeply treasured.
Posted by Elizabeth Kaeton at 8:29 AM

and prayers are fervently promised

Prayers arising for you..

We need your witness, both in the pulpit and in the library. Keep it up, and know you're in my prayers this week.

And a Belated Happy Birthday to you, too. :)

Fervent prayers from here too. You'll do fine. And you already have one sort of victory today on the HoB/D list. One at a time.

I'll pray for you too.
Lindy