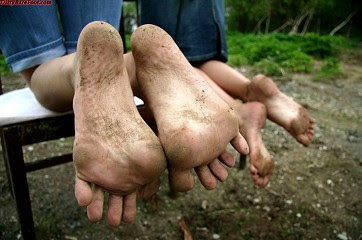 The Episcopal Women's Caucus, of which I am privileged to serve as President, recently announced the newest incarnation of our "Angel Project" in the last issue of Ruach, our quarterly publication.

The response has been interesting and amusing when it has not also been a reaffirmation of the multi-layers of sexism in the church.

You can read about the article in The Southern Cross, a publication of the Diocese of SW FL, as well as in The Living Church

Well, as you might imagine, The EWC Angels are my favorite kind. We have muddy feet. That's often an unavoidable consequence when you get your hands dirty in the hard work of justice in the church. Your feet get muddy, too.

What we didn't expect was the mud that has been thrown at us.

Isn't that interesting? A hit list for goodness sake!

The Living Church says that we are going into these dioceses "uninvited." Well, that's certainly sensational, but it's far from true as you will read in my letter to them which I have posted below. This, despite my very careful phone interview with the journalist from that esteemed conservative magazine.

Then again, we ought not be too surprised. it was, after all, TLC which brought us the sensational headline of the "illegal" deposition of Bishops Schofield and Cox.

The HOB/D (House of Bishops and Deputies listserv) has a running conversation about the "violence" done to "orthodox" clergy who have been deposed because they left the Episcopal Church.

Susan Russell has run a wonderful piece about the Apples and Oranges of Violence.

If you head over to read the article in The Southern Cross, you'll find a few women in the diocese of SW FL who are scratching their heads and saying, "Sexism? What Sexism? Not in THIS diocese! Why look, we have women priests and women rectors and even a lay woman as President of the Standing Committee."

It has ever been thus: those who benefit most from the institution are most often its most fierce defenders.

The Angel Project is, first and foremost, about providing pastoral care and listening in those dioceses where women have written to us for years about the subtle and blatant forms of sexism they endure.

Indeed, since the announcement about The Angel Project, even more letters have poured in, some from women as old as 82 as well as young women who are seeking a fuller expression of their ministry in the institutional church - from ordination to Eucharistic Ministers and Visitors to Lectors to being able to initiate new ministry.

Some of the sexist blather comes from women themselves. One woman wrote to say that she overheard one of the Altar Guild women say to another, "I just hate it when that woman deacon reads the Gospel. A woman's voice was just not made to heard in church." "Yes," said the other, "let's talk to Father about it."

The writer reported that it didn't take long before that deacon was transfered out of that parish. I have no doubt that "Father" reported this conversation to the bishop verbatim as his reason to request the deacon's transfer. Can't you hear him? "Why, even some of the women are complaining." Whatever was the bishop to do?

In fairness, we believe that some of the bishops in those dioceses will be shocked to learn what is going on, right under their miters. We trust that these same bishops, once they hear the stories of these women, will begin to institute the change necessary to make certain that the full inclusion of Christ Jesus will be incarnate in their dioceses.

We're talking about systemic change, not just changing the faces at the top. That's a longer, slower process. Not to worry. Angels with dirty feet may not be a particularly patient lot, but we are usually blessed with an abundance of persistence and tenacity.

Here's what I just sent off to the Editor of TLC. Stay tuned. Film, as they say, at eleven.

Oops! Apparently, the person who wrote the headline, “”Women’s Caucus Plans Uninvited Visits to 11 Dioceses” (TLC April 13, 2008) did not read the article in its entirety. Right there, in the last paragraph, it reads, “Any celebration of the Eucharist would be done in a private, pastoral setting in response to an INVITATION (emphasis mine) from the women.”

In addition, someone must have edited my quote which ends the article “It would certainly not be done in a church either.” I added, “ . . .in those diocese where the ordination of women is not recognized and if the women in those dioceses felt that the celebration of Holy Eucharist might be interpreted as an act of defiance or protest.”

My, my, my. That a pastoral, listening process which intends to tell the story of the sexism – in its most blatant and subtle forms – which persists in our church can provoke sensational words like “uninvited” and “hit list” only serves to underscore the need for this new incarnation of The Angel Project.

I suppose the EWC owes a word of thanks to TLC and The Southern Cross (the Diocese of SW FL’s newsletter) for proving our point far better than we ever could.

Elizabeth: Amen, Hallelujah! I was thrilled to see the article in TLC and very much hope that we will see you in the Diocese of Dallas.