The "Character of God" or "God as Quite A Character"? 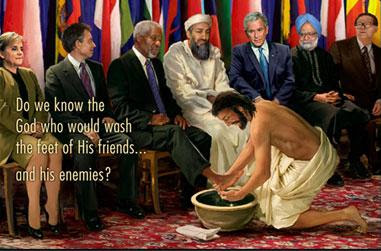 The posters promote the Good News Tour – a religious conference – and organizers say they were trying to make a statement about God, not politics.


The complaints, however, prompted advertising executives who initially approved the posters to remove them.

“Clearly we’re disappointed… we knew the pictures evoked a lot of response…A lot of people think we’re trying to make a political statement, which is not it at all,” said conference organizer Mark Merizan.


Brad Cole, founder of HeavenlySanctuary.com, told KGW that the picture was meant to parallel the story of Jesus washing the feet of Judas.


“No one is Judas in the picture, but the meaning is that Jesus would stoop to wash the feet of his enemies. The meaning is that in that painting of powerful world leaders -- and one powerful terrorist -- the one with all the power is ultimately Jesus.”

The purpose of the conference is to discuss the character of God, according to Cole.

“People opposed to this picture feel that God isn't that kind. We believe that he is,” Cole said.


In the Bible's Gospel of John, Jesus washes his disciples' feet prior to Judas's betrayal and urges the disciples to wash one another's feet going forward.


Christian scholars interpreted Christ's act as an example of humility and willingness to serve even his enemies.


The Good News conference takes place November 2 and 3 at the Oregon Convention Center.