"The devil had already put it into the heart of Judas son of Simon Iscariot to betray him."
A Homily for Maundy Thursday
All Saint's Episcopal Church, Rehoboth Beach, DE
(the Rev'd Dr.) Elizabeth Kaeton

Our thoughts this night turn mostly to the liturgy of washing feet and the humility it requires.

Well, some will admit to "humility". Others will simply say, "YUCK! No way!"

I want to submit to you that we can not really understand the power of this act of foot washing without understanding the actions of Judas.

As loathed as many of us are to have our feet washed - I served one church where they insisted that they only have their hands washed, not their feet - I suspect there is no one in this room who wants to be associated in any way with Judas Iscariot.

I have no doubt many of us have felt betrayed. Probably many times in our lives. The stories spill out without too much prompting.

It is, perhaps, the worst of human violations.

The question has been asked by many an earnest scholar over the centuries: Could the plan of salvation have been carried out without the betrayal of Judas?

Of course, first you have to believe that there as a "plan of salvation" that included an "atonement" - the sacrifice of a life as recompense for the "sin" of the quest for knowledge of one man - one mythical man. Who was supposedly seduced by his wife. Who was betrayed by a talking snake.

I suppose if you believe in a story that hinges on a talking snake, the theory of the atonement makes a great deal of sense.

But, for tonight, let's take a closer look at the so-called betrayal of Judas. Let's consider, for a moment, that this betrayal is integral to the story of the life, death and resurrection of Jesus. 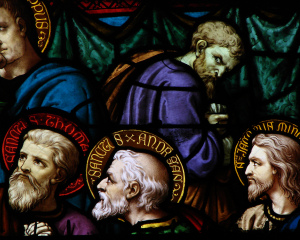 John's Gospel states, "The devil had already put it into the heart of Judas, the son of Simon Iscariot to betray him."

Really? The devil made him do it? Like the talking snake made Adam do it?

How are we to understand role of "the Devil" in this story?

The literal translation of the word “the devil” in that sentence is “the slanderer.” That is, one who distorts the truth to hurt someone else.

It is understood as the power of evil, a demon—maybe the demon of all demons.

But we should remember that evil is not something that existed before the world.

Evil is not an equal power competing with God.

Evil is not something that was created by God.

Evil is something that people do.

It is important to remember - and never forget - that evil is a human potential. We all possess it.

Because, we get scared.

And, when we get scared, we sometimes make wrong choices.

And, sometimes, when we make wrong choices, people get hurt.

Sometimes, when we make the wrong choice because we're scared, people die.

Like they did in Brussels. Or, in Paris. Or, in San Diego. Or, New York. Or, Syria. Or Turkey. Or Greece. Or Iran. Or Afghanistan. Or Jerusalem. Or Palestine.

The Judas Effect, she says, happens whenever we put our trust in the institution rather than the divine.

Listen to that again: The Judas Effect - betrayal - happens whenever we put our trust in the institution rather than the divine.

To put an even finer point on it, betrayal happens when we put our trust in the power of people - even our own power - over the power of God.

That's precisely what Judas did - because he was scared - and it drove him insane.

Just consider that thought for a minute or two. Consider a time when someone you know has chosen their own power - or the power of the institution (the business, the corporation, yes, the church) - over trusting the power of God?

Consider a time when YOU have chosen to trust your own power - or the power of the institution (the business, the corporation, yes, the church) - over trusting the power of God?

Think about that for a minute.

Can good come out of evil?

That is one of the lessons one can learn from the story of The Passion of The Christ.

As simplistic as it sounds, it is often difficult to remember that resurrection can not happen without death. We talk a good line about resurrection but we don't want to go through the messiness and the sacrifice and the pain and the death.

And, death - or, at least pain and suffering - can be  the result of betrayal.

And, death isn't always the end of the story.

I want to submit for your consideration this night that it's very hard to betray someone after you have humbled yourself to the power of God working through you. After you wash someone's feet.

You may want to say, as Peter said to Jesus, "Oh, no! You will NOT wash my feet."

And, Jesus will say to you, as He said to Peter, "Well, okay, but if you don't let me wash your feet, you can't have any part of me."

It's even more powerful to be humbled by having someone else wash your feet. 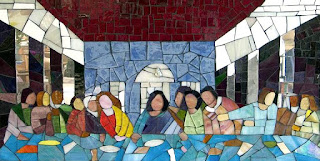 This is why Max and Eunice and Susan and I will not wash everyone's feet tonight.

It's why you must wash each other's feet and have YOUR feet washed by others - not just Max or Eunice or Susan or me.

In that act of humility - washing and being washed - the mystery of community is deepened.

In that act of humility in community, fear is removed and love is placed in our hearts. A new commandment of loving one another as Jesus loves us begins.

And, when love deepens in our hearts - into the heart of community - I submit to you that there is little or no room for betrayal.

"So if I, your Lord and Teacher, have washed your feet, you also ought to wash one another's feet. For I have set you an example, that you also should do as I have done to you. Very truly, I tell you, servants are not greater than their master, nor are messengers greater than the one who sent them. If you know these things, you are blessed if you do them."

Let us listen deeply, this night, to what the Spirit is saying to the church.

Because, if you know these  things, you are blessed if you do them.

Amen.
Posted by Elizabeth Kaeton at 9:55 PM No comments:

Yee-haw: Be true to your own dance. 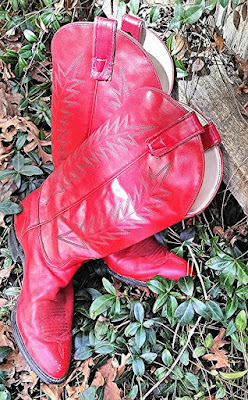