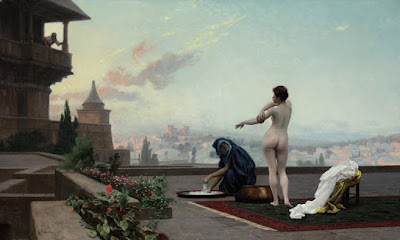 Bathsheba is the fourth woman named in the lineage of Jesus recorded in the first chapter of Matthew. (Matthew 1:6)

Her story is told in the Hebrew Scripture of the Second Book of Samuel. Like, Tamar, Rahab and Ruth, her scriptural sisters before her, she comes with a complicated, troubled past. And, like her sisters, Bathsheba also acts righteously, although the biblical narrative about her is often tarnished in the telling by her extramarital affair with King David.

Bathsheba was the wife of Uriah, one of King David’s generals. David had made quite a name for himself having slain “18,00 Edomites in the Valley of Salt” (2 Sam 8:13).

The very next chapter contains an endearing story of Samuel that ought not be missed. David takes in Mephibosheth, the crippled son of his dearest friend Jonathan and grandson of Saul. Mephibosheth eats at David’s table and is treated like “one of the king’s own sons”.

The story makes abundantly clear the love between Jonathan and David. It is an interesting prelude to the story of the darker side of the King in this next chapter of his life.
Bathsheba’s husband, Uriah, is near Rabbah on the front lines of the battle with the Ammonites.

David, on the other hand, is back at home, feeling invincible.

Even though it was “the time when kings go out to battle,” (2 Samuel 11) David decides to stay home. Perhaps this sense of invincibility is the reason he makes no secret of his lust for Bathsheba, sending his men to fetch her after he sees her bathing on her rooftop. 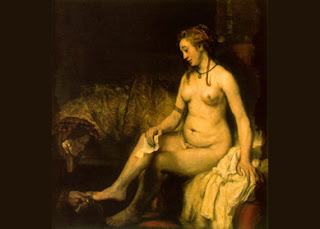 Like the story of most women, opinions about Bathsheba vary widely on a continuum between two extremes. She was either a temptress who seduced David or she was an innocent victim and David raped her.

No matter. Both the culture and law of the ancient times in which she lived were stacked against her. If she succumbs to David, she is guilt of adultery. Deny him and she is refusing the King.

Either way, both actions are punishable by death. Either way, she knows the ancient shame of women which continues to haunt women to this day.

The whole illicit affair probably would have gone unnoticed except that Bathsheba becomes pregnant. Now, David has to put on his big boy pants and become responsible.

Except, of course, he doesn’t. He sends for Uriah to come home from the war to be with Bathsheba. It’s the only way to protect his reputation and save Bathsheba’s life.

It is believed that Uriah must have been onto David’s plot because he refuses to come home. (2 Samuel 11) His decision heaps judgment on David’s head. While David is relaxing at home, sleeping with other men’s wives, God’s ark is in a booth on the battlefield. He is not on the battlefield during “the time when kings go out to battle.”

And, just like that, the situation is no longer about Bathsheba and the pregnancy.

David devises a plot to have Uriah and others killed in battle against the Ammonites by sending Uriah and others too close to Rabbah. David’s nefarious plot is successful and he does the "righteous" thing and marries Bathsheba.

But, what David has done “has displeased the Lord,” and God sends the prophet Nathan to rebuke him, predicting that the child will not live because of “the sins of the father” (2 Samuel 12:14).

Even though David repents, the child dies.

Consider, then, the lowly estate of Bathsheba. Her husband Uriah is murdered and her first born son taken from her as recompense for David’s sin. For her whole life, she must endure side-glances and whispers and rumors of scandal and shame.

How much grief and suffering must one woman bear for the sins of one man?

Eventually, Bathsheba bears another son, Solomon, of whom Scripture says, “the Lord loved him”. (2 Samuel 12:24). David even promised that Solomon would be his heir.

But, Bathsheba isn’t out of danger yet. When David is old and his house is in shambles, his son Adonijah tries to take over. If he becomes king, Bathsheba will be viewed as an adulteress and neither she nor her son Solomon will be recognized as “legitimate”. 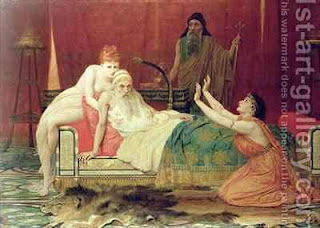 The prophet Nathan understands well the implications not just for Bathsheba and Solomon but for all of Israel as well. He also understands that Bathsheba has special authority to intervene with David.

Bathsheba cannot know at the time that Solomon’s reign will be the most peaceful and prosperous time of Israel’s history, and she does not know that the Savior of the world will be born through Solomon’s line.

Bathsheba’s action saves her life and makes Solomon King, ensuring God’s favor on Israel. Bathsheba went to have four more sons with David (Solomon, Shimea, Shobab, and Nathan) and two of them are listed in New Testament genealogies. Joseph, Jesus’s earthly father, was a descendant of her son Solomon (Matthew 1:6) and his mother, Mary, was a descendant of her son Nathan (Luke 3:31). 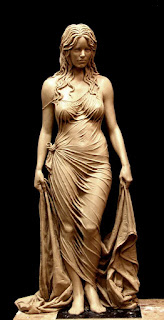 So, when you light the fourth blue candle of your Advent wreath this evening, remember the story of one of the women in the genealogy of Jesus.

Remember Sister Bathsheba and how she transformed her lowly status of vulnerability and shame as well as the deep grief of the murder of her husband and death of her firstborn son into a vehicle of the redemption of Israel.

Through her righteousness came not only the wisest leader of the most peaceful and prosperous time in that ancient land but also the Incarnation of Ancient Wisdom.

Holy God, as we begin to turn our eyes toward the lowly manger in Bethlehem where we await the birth of Jesus lying weak and vulnerable in the midst of the harshness of the world, help us to turn our hearts toward hope and trust in your goodness.

Give us the strength and righteousness of Bathsheba that shame, vulnerability and grief may be transformed and through us wisdom and salvation may be born again.

Email ThisBlogThis!Share to TwitterShare to FacebookShare to Pinterest
Labels: Prophets of Advent

The Prophets of Advent III: Ruth of Moab 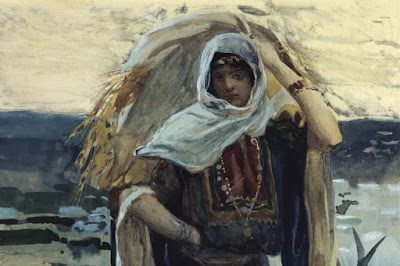 Imagine if we opened our ears and listened to others first before opening our mouths.

Imagine if we joined in – meeting people where they are – before trying to be heard or take over the lead.

Imagine if we never took over the lead but led by joining in where people are.

Imagine if you paid attention to little things - say, just as tiny as  an asterisk - so that you could listen for the larger, deeper meaning of things rather than just staying on the surface.

Imagine if the means were the end – that the life was not the destination but the journey.  (Or, as James Taylor sings, “The secret of life is enjoying the passage of time.”)

And, imagine if we could better appreciate the present moment, where we are – right here, right now – and all the people in the room, all connected by beat and breath, all giving glory to God in the very same room.

Sr. Faith Anthony says that to live the monastic life is to earn a PhD in love. "You learn how to love and how to be loved," she said.

Just think about that for a minute. Breathe through those words. Let them sink in.

Well, years ago, I designed a T-shirt that read:

On retreat with the sisters of the
Order of St. Helena.
Warning: These are professionals
Do NOT try this at home.

It just looks and sounds like a bunch of nuns chanting in the chapel, right? 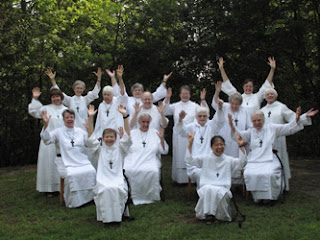 There's so much going on in that chapel, such intense spiritual energy and focus and yet such an easy, gentle, floating, serene sound.

Here's what a believe: convents and monasteries are one of those "thin places" described in Celtic spirituality. It's a place very close to "the veil" between heaven and earth.

I'll tell you something I had forgotten: It really is not as easy as it looks.

But, when you do come to the convent and stay with the sisters on retreat? Oh the things you will learn and the places in the heart you will go.

Here's an absolutely glorious antiphon for Advent, used as an O-antiphon beginning December 16th. O Virgin of Virgins is an Anglican addition, used on December 23rd.

O Virgin of virgins, how shall this be? For neither was there any like thee before thee, nor shall there be after:
Daughters of Jerusalem, why marvel at me? The thing which ye behold is a divine mystery.