The Prophets of Advent II: Rahab, Canaanite of Jericho 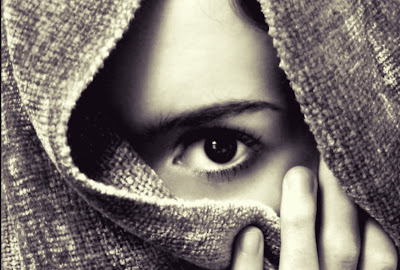 Rahab is the second woman recorded in the genealogy of Matthew ( Matthew 1:1-17)

She is called a prostitute in both Hebrew (Joshua Chapter 2 & Chapter 6.) and Christian (Hebrews 11:31) scripture, but the more we learn about human trafficking in ancient and modern times, the more we understand that this was most likely not a woman living a "lifestyle" of her own choosing.

What is clear is that she was three times an anawim - one of the social outcast beloved of God: a woman, a foreigner - and, a Canaanite of the city of Jericho at that - as well as a woman in the sex trade, probably then as it is now, not always a voluntary industry.

Rahab is also a woman geographically on the margins. The house in which she lives is on the outskirts of the city. Her rooftop was adjacent to the wall of the city. As the story unfolds, we will see that she uses her both her demographic and geographic locations to her distinct advantage. 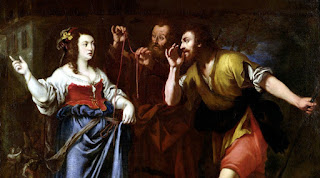 Here's the story: Joshua, son of Nun, has led the Israelite army across the river Jordan. Before entering the land west of the Jordan River, Joshua sends out two spies to check out the city of Jericho, the most important and fortified Canaanite city in the Jordan Valley.

The king of Jericho heard that two Israelite spies were within his city and ordered them to be brought out to him.

Rahab, the woman with whom the spies were staying, protected them by hiding them on her roof.

She told them how the citizens of Jericho had been fearful of the Israelites ever since they defeated the Egyptians via the Red Sea miracle (some 40 years prior). She agreed to help them escape, provided that she and her family were spared in the upcoming battle.

The spies agreed to her request, giving her three conditions to be met: 1) she must distinguish her house from the others by hanging a scarlet rope out of the window so the Israelites would know which home to spare; 2) her family must be inside the house during the battle; and 3) she must not later turn on the spies.

The two spies safely escaped the city and returned to Joshua. They reported to him that "the whole land was melting with fear".

The Israelites crossed the Jordan into Canaan where they laid siege to the city of Jericho. The city was completely destroyed, and every man, woman, and child in it was killed. Only Rahab and her family were spared. 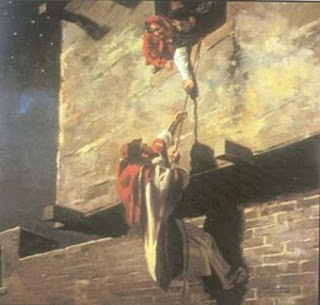 Eventually, Rahab marries Salmon, an Israelite from the tribe of Judah. Her son was Boaz, the husband of Ruth. Joseph, the legal father of Jesus, is her direct descendant.

Rahab is not someone we would expect to defy a king, save Israelite spies, and play a part in God’s people taking the Promised Land. But this is exactly what happens.

Rahab is the first occupant of the foreign lands to show loyalty to Israel and Yahweh, and is welcomed in as a new member of the nation of Israel.

In Joshua 2:8-11, Rahab reveals herself as a prophet of God. She gives a declaration to the spies that Israel will successfully take over the land of Jericho.

The Israelites do not yet know this to be true, but her words bear weight with them and they carry her message back to Joshua.  Rahab’s foretelling of the work of the Lord causes Joshua to move into action.

Rahab plays the temporary savior to Israel by protecting the spies, declaring their victory, and eventually becoming part of the lineage of the House of David.

In traditional religious literature, much is made of the "fact" that Rahab is a prostitute whom God lifted high. She is more likely an oppressed and marginalized outcast, forced into human trafficking industry in order to survive, in whom God saw great potential and ability. 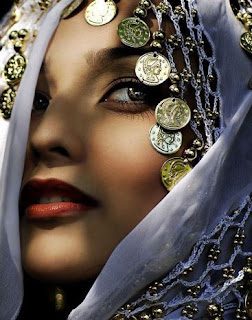 So, when you light the second blue Advent candle this evening, remember the story of Rahab, the Caaninite of Jericho.

Remember Sister Rahab and her ability to use her demographic and geogrpahic location, both concidered morally suspect and sinful, as courageous rescurer, bold prophet, and humble vehicle of the royal lineage of The Messiah.

Remember and tell her stoy to your children that your children's children, from generation to generation, may know that the Glory of God is the human person fully alive.

Holy God, give us the ability to use all that we have been given, no matter how humble or seemingly inadequate or inferior, to your glory and in service of your love for all your people.


Posted by Elizabeth Kaeton at 7:07 PM