"God now calls you to a special ministry of servanthood . . ." 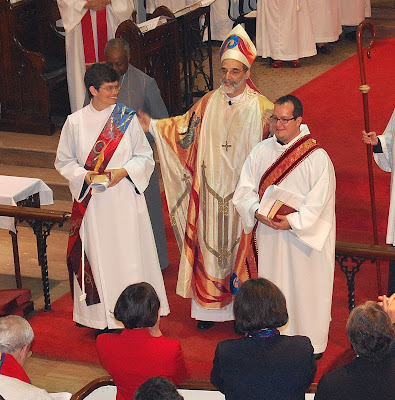 It was a grand day in the Diocese of Newark. We ordained two people to the order of transitional deacon.

Sr. Shane Margaret Phelan is a PhD credentialed academic and author, the former Professor of Political Science at the University of New Mexico.

She is the author or editor of several books on lesbian and gay politics, most recently Playing with Fire: Queer Politics, Queer Theories. She also served as the chair of the American Political Science Association's Committee on the Status of Lesbians and Gays in the Profession.

Jon Richardson is 30 years old, a recent graduate of the Theological School at Drew University and a year of Anglican Studies at GTS, who will, eventually, go on for his PhD in the next few years.

He was, for two years, a seminarian at St. Paul's, Chatham, and was with the IntegrityUSA team in Lambeth. He was also an Integrity volunteer during GC 2006. He is bright and creative, sensitive and caring.

He's still terribly wet behind the ears, but he has the intelligence and boundless optimism and energy of youth which will help him as life dries those ears with a sometimes very course and rough towel.

The music was glorious and although there was no choir, the congregational singing was enthusiastically and beautifully done in two and sometimes three and four part harmony.

It was good to see the cathedral so full - even people up in the choir loft. The sermon was thoughtful, challenging and provocative.

The Holy Spirit clearly showed up (well, we all agreed that it must have been She who was messing around with the sound system a time or two to the annoyance of the bishop).

Both new deacons represent different ages on the life spectrum. Both bring important gifts to this church of ours. I'm so proud of both of them, I could just burst!

It's good to know that future of the church is in good hands.

This afternoon, we graduated 8 people from EFM programs. Tomorrow afternoon, we have another batch of 70+ kids being confirmed. That's about the number we confirmed last month when 11 of my kids were also confirmed.

The Episcopal Church is very much alive and well in many places - if we but have the eyes to see and the ears to hear and the will to tell our story in the context of the Gospel and with enough honesty and integrity and transparency that others will also be compelled to join us.

Or, as this morning's preacher told us - to love Jesus even more than the 'hype' about Jesus.

The only thing limiting our growth - in numbers as well as depth of spirituality - is our imagination. Here's the Contemporary Lesson (read in place of the Epistle) from today's ordination service.

It is excerpted from the play, "Six Degrees of Separation" by John Guare. In it, he speaks of the power of imagination. I think it is the secular way of talking about the power of the Holy Spirit:

I'm convinced that there is no real shortage of priests in our church. There is, however a serious shortage of religious imagination.

If we can work on THAT shortage, we'll be on the path that will take us to where we are all trying to get to.

Hat tip to Bill for the great photo.
Posted by Elizabeth Kaeton at 6:58 PM