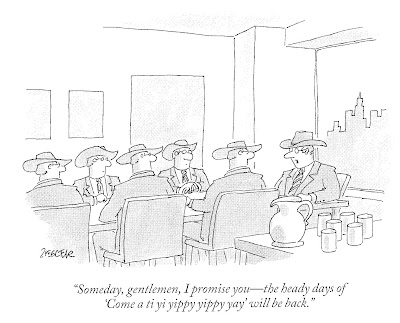 I've just been sent this artist's rendition of one of the last moments at the very last meeting of the Standing Committee of the now former Episcopal Diocese of Fort Worth, the former (now deposed) Episcopal Bishop of Fort Worth, Jack Iker, presiding.

The report is that after Jack Iker made this heart-felt but heady promise, members of the Standing Committee spontaneously broke into the unmistakable, distinctive sounds of what has become known as "Texas Anglican Chant."

Several coyote were heard to join in, as the chant closely resembles their mating call, but Iker assured everyone that no 'natural laws' were either violated or broken.

(Thanks to the New Yorker for the cartoon, and my friend Richard who sent it along. For a magazine filled with cartoons that are 'too sophisticated to be funny', I found this one is hysterical. Or, maybe it's just because, deep down somewhere, I really am going to miss the 'Men in Black' at General Convention.)
Posted by Elizabeth Kaeton at 6:10 PM