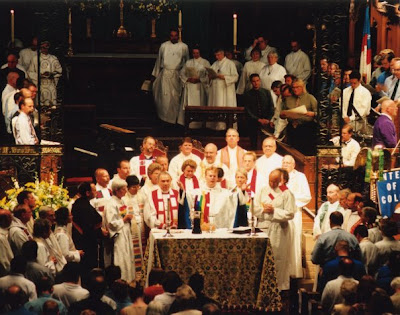 Susan Russell posted this picture at her FaceBook site last night. She has other GC memorabilia on her Blog.

That's the scene from the IntegrityUSA Eucharist held in Denver in 2000. You can read one account of that convention here.

You may not know this, but that picture represents a 'first'.

Can you guess what it is?

Take a close look at all the people standing around the altar.

On the left in front of the altar is Bishop Steve Charleston who was the preacher that night. He totally rocked the house.

That woman to the left of the Unknown (to me) Man in Black is Bonnie Perry. And, that looks like Mac Thigpen way over there on the right.

There are obviously others you may recognize but I don't.

Starting to figure out the Very Big Radical Thing that happened that night?

Yup. Other than Bishop Steve, everyone else standing 'round that altar is an LGBT person.

Well, it was a Very Big Radical Thing in 2000. Indeed, it was the Very First Time LGBT clergy vested and 'came out' during an IntegrityUSA Eucharist.

I remember posing for a picture on the steps of the Cathedral and everyone was absolutely giddy with our 'group coming out' being recorded for posterity.

Sounds silly now, I know. I know. It incredible to remember that this picture was taken only 9 years ago.

We had been so very, very weary of being ignored. Intimidated. Threatened. Frightened. Or, seeing our sisters and brothers being treated that way.

Many of our LGBT sisters and brothers preferred to stay in the pew, traveling 'incognito', because to do otherwise would have endangered their ability to do their ministry back in their home diocese.

Others of our LGBT brothers and sisters whose vocations to ordination had been denied because of their sexual orientation were also sitting in the pew and, for the first time, had some hope - a vision of the possibility and health and wholeness which comes when the truth is told and the secret no longer has power over your life.

It was an act of Holy Defiance.

The Outcast gathered in the Sanctuary.

The Unclean who had been washed in the Blood of the Lamb.

To you, it may look like a group of clergy con-celebrating at the altar with a bishop.

Goodness knows, we need to see images like this. B033 continues to threaten and intimidate and frighten. Vocations continue to be denied based on sexual orientation.

We need to recapture that pioneering spirit of Holy Defiance from Denver and bring it with us to Anaheim.

If you recall, Gene Robinson was elected bishop of NH three years later.

I continue to hear the prophetic words of Bishop Steve Charleston, calling us on, "No more victims. No more. No more."

No more victims of injustice. All the Sacraments for all the Baptized.

Justice begins, as it always has, with the holiest acts of Holy Defiance:

Love Incarnate, Love Divine.
Posted by Elizabeth Kaeton at 7:17 AM

I'm over 50 years old, and have struggled over my life with the various traumas and difficulties that a lot of people have -- as well as some around identity that are more uncommon. Because of some of the people around that altar and many more lgbtq clergy in my diocese, I began to see and know that maybe what I didn't know about me, and was afraid to face had to do with sexual orientation, who I would love if I wasn't worried about how my parents and family would react. I'm a late bloomer ... and am deeply indebted to all of you. Thank you.

Elaine C - you make my spirit sing. Thank you

Having just come out to my congregation within the last 5 weeks, in a denomination that is still determined to deny lgbtq people the radical inclusion of Jesus Christ...

My otherwise cynical heart is full.
You both have our prayers down here in Bal'mer.

Thanks be to God for the whiteness of those who stood firm in the faith of the all loving God.

Yup, I am to the left of ??? in the brown habit with purple stole.

Another one of those roasty-toasty Integrity Eucharists (at least 100 degrees in that cathedral).

May our numbers triple with each triennium!

Amen to Friar John's words. Prayers from the Northeast Corridor.

Ah, that's you, Caminante! There you are! Wasn't that just a thrill? It was a great night - as all IntegrityUSA Eucharists are. Always great preaching. Always FABULOUS singing - robust, enthusiastic and three to four part harmony.

This year, we have a double-header: Bishop Gene is presiding and Bishop Barbara is preaching.

If you are in Anaheim, it's an event not to be missed. If you're not - stay tuned for pictures and video. And, hopefully, the sermon on video and sound.

Elaine C. and Cecilia -- prayers for you both.

Yes, it is a big deal and I am at a point I needed to be reminded of that. Many thanks.