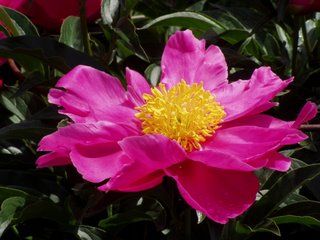 Ms. Verna Dozier, 88, a retired D.C. public school teacher and administrator who became a leading theologian and lay preacher in The Episcopal Church, died September 1 of complications from Parkinson's Disease.

Ms. Verna was a 'fierce' laywoman whose deep commitment to living out of and into our Baptismal Covenant as the only license needed by any Christian to do ministry, helped to shape and form the theology of The Episcopal Church.

She was the author of many books, among them: "Equipping the Saints"(1981), "The Authority of the Laity" (1982), and "The Dream of God: A Call to Return," (1991), in which she argued that religious leaders too often ignore social justice to focus instead on spirituality. "God wants his people to follow Jesus, not worship him," she said.

My favorite memory of Verna Dozier is the "charge" she gave to Jane Holmes Dixon at her consecration at the National Cathedral in Washington, D.C.

Ms. Verna, also affectionately described by neophytes to the church as "that little itty bity African-American woman," was in that grand stone pulpit, standing on a box and yet still not quite visible from the congregation.

When it came time for the "consecration charge," she peered up over the microphone and, speaking like the spiritual giant she was said, "Jane Holmes Dixon, stand up."

And, of course, Jane did. Immediately.

She cleared her throat and began, "Every leader in Christian community most often wants one thing," she said, pausing before she continued, "They want desperately to be loved."

The silence was deafening. Everyone in that big cavernous cathedral who knew anything about Christian leadership knew exactly what she was talking about. We held our collective breath waiting for what was coming next.

I could hear myself gasp even over the gasps of recognition all around me.

I'll never forget that moment. Ever.

And, I will forever be grateful for this and all the other many valuable lessons taught (like, if you're going to drink Bourbon, it should be Maker's Mark) by that quintessential Christian teacher, leader, pastor and prophet, Ms. Verna Dozier.

May she rest in peace and rise in glory.
Posted by Elizabeth Kaeton at 8:27 AM

The end of an era of heros, I think.

Rest in peace and rise in glory, indeed. We are poorer for her passing but so, SO much richer for her life and witness!

I have never read anything like that. It speaks everything in us that cries against the 3 AM moment when it is only us and God...when there are no buddies to call up, when there is no assurance that anyone or anything is in the Heavens except a cover of stars which have been dead for a zillion years before we see them. It is the summons to radical belief in something that I gather even clergy will admit sometimes escapes them--what Maimonides called the First Principle, that God exists and that (by extension) we are a part of God's creation.

I think of Pema Chodron's injunction to allow ourselves the necessity of hopelessness because with hope we destroy any chance to facing the moment as it is. What a nasty lesson...to live without hope. What a nastier lesson...to kill off the need to feel loved instead of loving.

Gee, Kenneth, maybe I'm not understanding you, but I don't think Vern ever meant that to say that, if we let die the place in us that wants desperately to be loved, we live without hope.

In fact, I think she's calling for a radical dependence on God - and not our own ego.

But, if I'm not understanding you, I'm sure you'll let me know.

I appreciate your comments. Thanks.

I thought of Pema Chodron on first hearing this, too, but in a different way. I hear Verna saying that that part of us that seeks so desperately to be loved, is not of help to us; it must die. I hear Pema saying any seeking, striving, explaining, complaining or hoping - all of it takes us out of the present moment, the only moment we have. So, her injunction is to know we are experiencing seeking or whatever we are experiencing, and to let it go. In letting it go, we allow space for the present moment. So, letting go of hope is not hopelessness, but touching boundlessness, God’s presence. Letting go of desperately seeking love, actually leads to love. Same message.