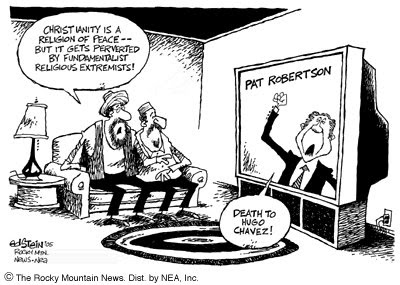 Someone just sent me this parody from the The Brisbane Times When humor is applied to divisive issue, you know you've turned the corner on the long and winding road to justice.

A fundamental wrong in letting some marry
Lisa Pryor March 31, 2007

The views I am about to express are not very fashionable. They are certainly not politically correct. But I believe what I am about to say must be expressed to protect the institution of marriage.

Too often in the media, currency is given to the theory that everyone should be allowed to marry regardless of gender, outlook and whether the two people are creating a suitable family environment in which to bring up children.

Well, it is time to ask some hard questions about this attitude. The only way we will save marriage is to reclaim the institution for the mainstream. Marriage is for normal people who want to raise children in a healthy and secure environment. This is why we should ban religious fundamentalists from marrying.

Fundamentalists of all religions engage in unnatural practices. The unconventional views they hold inevitably lead to their children being teased in the playground and, no matter what studies may show, there is surely a greater risk they will grow up to be fundamentalist themselves if they are exposed to dangerous ideas from a tender age.

No matter what fundamentalist propaganda may claim, fundamentalism is not sanctioned by nature. There is not a single species in the animal kingdom which stresses the infallibility of the Bible or adheres to the teachings of the Koran. Even in the higher orders of primate, no species has conclusively shown faith in the virgin birth or the second coming. Animals tend to be atheist, pagan or animist, which shows that these views are surely instinctive, normal, natural and right.

Maybe you think it is OK for humans to differ from animals. Maybe you think consenting adults should be able to do what they like regardless of whether the average person agrees with their views.

Such a liberal approach is a slippery slope. When we allow fundamentalists to marry it says that fundamentalism is OK. It encourages these people to foist the fundamentalist agenda on the rest of the community. Before long they will be trying to "convert" people to their "religions". Should we risk this? Fundamentalists are a small minority of the population, so only a small number of people would be inconvenienced by a ban. It would not even be discriminatory as fundamentalists would still have the right to marry - so long as they renounced their religion.

Let's not forget that we are not just talking about consenting adults. When you allow fundamentalists to marry it encourages them to have children. Sure, they might still have kids even if they cannot marry in the eyes of the law, but why legitimise it? Children are the true victims of fundamentalist marriages. Children don't get a say when they are born into a household practising a fundamentalist lifestyle. Tiny children should not be subjected to cultural experiments and social engineering. Imagine how confused and guilty children would feel when they were indoctrinated with the bizarre idea that they were born with the stain of original sin and were in fact so inherently bad that a man had to bleed to death to make it all OK.

Imagine also the teasing that children who have grown up in these "families" would be subjected to in the playground when other kids find out about their unusual views and practices. What are normal parents supposed to do when their children arrive home asking uncomfortable questions because they have been exposed to these groups at an age when they are too young to understand?

Before you know it, fundamentalist parents will be insisting preschool children read storybooks about the fundamentalist lifestyle in order to better understand it. There will be colouring books directed at four-year-olds showing Jesus turning water into wine and walking on water, as if it were gospel.

What hope does a child indoctrinated with this sort of propaganda have of growing up to be normal? Can you really tell me they will not be more likely to grow up fundamentalist themselves?

I suppose one chink in this argument is that banning a minority from marrying is utterly unfair, inhumane and intolerant. Kind of like the ban on gay marriage.