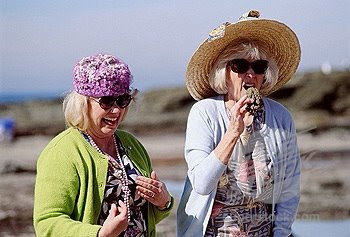 There's a blog that's new to me, but not new in the Blogosphere, that I absolutely love.

No, that's not them pictured above. I searched for a way to get their picture on my blog but couldn't seem to pull it off. So, I went with "style over substance."

Not that either Margaret or Helen would approve of that, necessarily. They'd have an opinion - or three - being uppity women of a certain generation.

Margaret's post yesterday was a classic: "The View Needs Glasses (Prop 8)". She took on Barbara Walters like an angry sister whose adult neices are in sore need of some good parenting. She's especially not pleased with Elisabeth saying,

"OK. I don’t like it but I can excuse it because Elisabeth comes by her hate honestly. She knows exactly what she is doing and in her world being young, blonde and married to a football star gives her permission to be a bitch. What does she care? Her children will be able to buy their way out of any problem. By the way, Harold says she’s not married to the good football player… his brother is the good one. I wouldn’t know. I just know the football player who married Elisabeth went for a Hail Mary pass and ended up with just a pass to hell."

She also took on "Cherry, Cheryl Seymore I really don’t care what her name is.. . " and her absolutely disrespectful remarks about Gay Marriage. Here's what Margaret said, "OK. You know what? When you are given a national platform on a TV show called The View, being too lazy to do some research isn’t an acceptable excuse. And when people’s rights are being taken away, your attempt at humor is insulting."

But wait - here's one for Ms. Walters: "(Cherry, Cherryl, Seymore) is making women everywhere look bad and Barbara Walters should have a little more respect for her audience than to allow this to go on any longer.""

But, the best quote is this:

But let’s step away from the church and state argument for a second. I posted yesterday that love is about the heart not the body. Trust me, if it was about the body a lot of us would be in a world of trouble. You can’t legislate love between two consenting adults. You just can’t no matter how hard you try. If you want to save marriage, marry someone you love. And that’s all I have to say about that."

Yeah, she's all that.

I can't WAIT to be an old lady like her when I grow up - reigning terror from my laptop sitting in my wheelchair.

G'won over and visit them. You'll be glad you did.
Posted by Elizabeth Kaeton at 6:25 AM

Don't be any great hurry to get older, to be a grandmother, to be a Senior citizen on the journey thru life.

We all get a turn, and believe me, it comes far too soon.

My aim is to turn into an old lady like Margaret and Helen. We need more!

thanks for bringing us Margaret and Helen - i hopped over there and could not stop reading! their take on The View is spot on! hilarity and truth - what a perfect combination.....

Oh, thank you, thank you for finding Margaret and Helen. I was needing a subject for my blog today and this was it! I am in awe of the vastness of their audience, and how many comments they receive! The NYT op-ed page should be so inspirational. Thanks.

What are you talking about, Lizbeth? You already ARE like them you are just Age Challenged!

There are rumors on the intertubes that this is a "front" site; that these two wonderfully articulate women are actually a fraud perpetrated by two men - ala Betty Bowers.
No matter, I love their stuff, too.

I'm sorry, but no man I know writes or thinks like that!