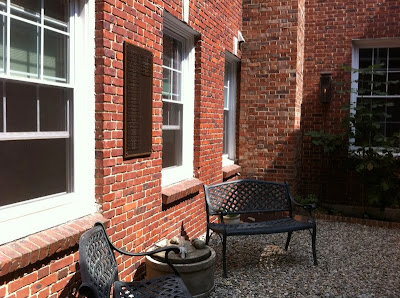 When I came to St. Paul's eight and a half years ago, the Memorial Garden which had been started in the 80's was in very sad repair.

One of the major projects I have been working on is to make this place a sanctuary for those who are interred here and all those who grieve their loss and come to meditate and pray.

If you look at the far wall, you'll see a gas light - our own "eternal flame" - which was added when we "renovated" the Memorial Garden. 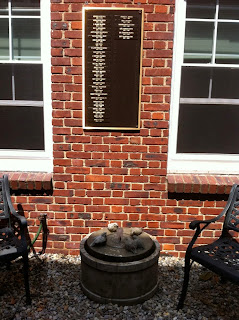 The columbarium, which is located across the way from what you see on your left,  was, well, in a word, distasteful.  There was nothing to indicate that it was a columbarium.  It looked rather like a very stark brick bureau.

No names anywhere. Just a brick structure with "niches" for ashes above and a large repository for urns below.

We put new doors on the repository. Those interred in the niches had their names placed on a plaque which we installed on the shelf in the columbarium.

There was a garden trellis on the wall you see in the picture on your left which had rotted and covered with overgrown vines.

We took down the garden trellis, which was above a grate which had shelves on which to place flowers, and covered it with stones.  The garden benches you see were donated by a family whose son, who was delivered stillborn, has his ashes interred in an urn in the repository. Until they moved away last year, we used to take it out on the anniversary of his death and have a little service of remembrance.

We erected a plaque on the wall with names of those interred in the repository which you can see on the wall to in the picture above and to your left. 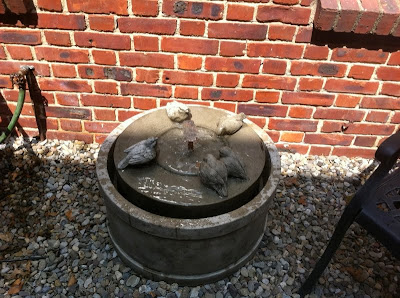 This is the latest addition to our memorial garden.  The picture doesn't do it justice, but it is a lovely water fountain.  It was given in memory of a woman who died last year after an eleven year battle with ovarian cancer.  She was one of the bravest woman I've even known.

Since we've renovated the Memorial Garden, I often go out there to say one of the Daily Offices.  There's such a sense of peace there.  It is even more so now with the water fountain.

One of the things I love about this space is that the room behind the wall you see above is the "nap room" for the Day Care that was started over 25 years ago by one of my predecessors.

There is a play room perpendicular to this room where the sound of children's laughter often floats and swirls over the garden.  Something tells me that the residents of the Memorial Garden do not mind having their eternal rest "disturbed" by their delightful expressions of childhood happiness.

I will be dedicating and blessing it on Sunday, right after I preside at my 75th baptism in eight and a half years at St. Paul's.

I can't imagine a more appropriate time for a tribute to a woman who fully lived her baptismal vows while she was alive.

Sometimes, the joys of being a priest far outweigh the costs of this impossible vocation.

This is one of those times.
Posted by Elizabeth Kaeton at 10:47 PM