Dykes on Bikes on Banana Seats 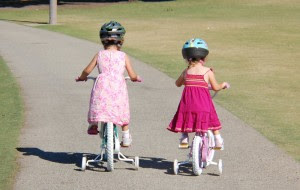 Even Gay Pride Parades have their traditions. The NYC Pride Parade, near as I can tell, anyway, is always led by the contingency known as "Dykes on Bikes".

At the drop of a Rainbow Flag, after the Quean has declared the start of the parade, comes the revving of the engines of an entire fleet of bikes with fiercely independent looking women at the engines. One year, I laughed out loud as I noted the then Bishop Suffragan of the Episcopal Diocese of NY, purple shirt all neatly pressed, on the back of a huge Harley.

I don't understand what it is about the image of women - lesbian women, especially - on a motorcycle that is either so frightening or amusing to so many people. I only know that it is.

So, you'll understand my complete enjoyment of the fun The website "The Gawker" is having with an article which appeared in Britain's The Daily Mail. Even NPR carried the story entitled, "Lost Bike Found After 41 years; Then, The Story Gets Weird".

Here's the story, in a nutshell (as it were):

One day, in 1970, 11-year-old lesbian Lisa Brown was riding her bike across a rickety wooden bridge over what is reverently described as "the mighty Herring river." As she went to make a slight adjustment to her path, Brown The Lesbian lost her balance and tumbled into the water, along with her bike. While Brown would eventually escape her watery grave and go on to become a great lesbian, her bike, deeply immersed in the muck, was considered lost to the ages.

Forty-two years later, Brown's wife Dierdre was walking the couple's dog about a quarter mile from the splash site when she noticed the old bike lodged among some trees.

Always hot on the trail, The Daily Mail picked up the story - a whole, entire year later!! - and ran it with this headline:


" 'It was like finding a long lost friend': Lesbian reunited with bike she lost FOUR DECADES ago after her wife spots it in muddy stream."

What will those wild and crazy "dykes on bikes" do next, huh?

I mean, whatever was to be done? The Daily Mail, being a bastion of stellar journalism, obviously had to dig up the lede buried by The Cape Cod Times.  Clearly, we Yanks wouldn't know how to write a scintillating headline which would call readers to learn of the pluraform perversions of homosexual women if we tried.

I don't know. Maybe it was the fact that "the lesbians" kept talking about the cool banana seat on the bike throughout the video. This was not overlooked by The Daily Mail which quoted the video almost verbatim.

I admit, it does sound better with a British accent. Funnier. More exotic, in a way.  Admittedly, the French would make it sound even more exotic, but then again, the French are pretty nonplussed by lesbians and have been for years. I think the French might even believe they invented lesbians. 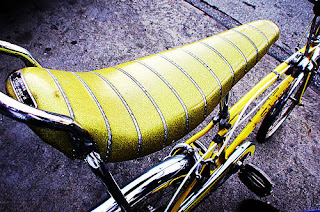 I don't know. Maybe it's Friday before a long, holiday weekend.

Maybe I'm so "up to here" with the discrimination levied against women which was enshrined in two amendments from the House of Bishops in the Church of England that I'm getting giddy about anything having to do with the British and women.

Dykes on bikes and banana seats.

Something tells me that this long holiday weekend isn't going to be anywhere near long enough.

Posted by Elizabeth Kaeton at 2:26 PM

I know what you mean about how giddy you can get in the face of relentless discrimination, the weirdness of male episcopal priests always keeping women out of the church... and then Dykes on Bikes... we thought they were cool and powerful. Banana seat can get you cracking up. Just the absurdity of it all.

I first saw them in 1986 at the Gay and Lesbian FREEDOM DAY parade in San Francisco. Remember the word FREEDOM was used before the whimpy word "pride." Kind of a cousin to the whimpy "empowered" vs. powerful.

Dykes on Bikes led the parade which consisted of mostly men for the rest of the march. Now I love the Dyke Marches the best, and I still have my Dykes on Bikes photos from that time! Turtle Woman

TW - some day, I'm going to hitch a ride with a Dyke on a bike for Pride Parade. I always wear my clergy shirt. That would be a hoot!