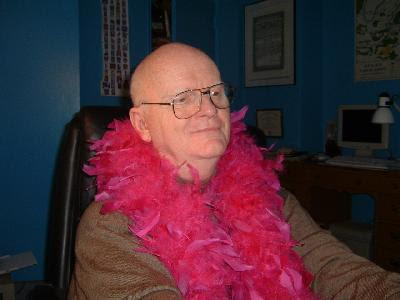 I am presently in NJ, getting ready to head off tonight for a Gay-La celebration in honor of Louie Crew. AKA, Her Royal Highness, Quean Lutibelle, of the House of the Alabama Belles.

I've known Louie since June of 1990. Robert Williams had just resigned as the first Executive Director of The Oasis, a ministry of the Diocese of Newark with LGBT people. Well, except then, we had neither the "B" nor the "T" - well, that we knew of, and even if we didn't we wouldn't admit it - and no one ever put lesbians first in anything, especially Robert. It was, after all, 1990.

I was in NJ to be interviewed for the position of Executive Director. Louie called me and offered hospitality for Ms. Conroy and me in the small Newark apartment he and his beloved Ernest shared.

So, here was this absolutely flaming quean on the other end of the phone, breathlessly enthusiastic that we should stay with him. He apologized as he explained that Ernest would be away. "My husband is a 'Sky Muffin'," Louie explained.

Louie giggled. "Oh, I mean, you know. He's a flight attendant - they don't call them stewardess anymore - for a MAJOR airlines. Flies all over the world. And, he's SUCH a stud muffin that I call him a 'Sky Muffin'." Giggle, giggle, snort, giggle.

I love people who finds themselves amusing, and I didn't want to be rude, but truth be told, I knew I was going to be alone during the interview and I'd rather have stayed in a hotel than with this ditsy quean. I am, after all, an Episcopalian so I thanked him profusely, packed my bags, took a deep breath, and off I went.

He met me at the airport. I fell in love. Instantly.

That hasn't changed since June of 1990. Well, that's not entirely true. I love him so much more today than I did way back then, if that's even possible.

Turns out, I withdrew from the process for The Oasis in 1990 and David Noregard went on to be the second Executive Director. In 1991, I became Executive Director of the AIDS Resource Center and Vicar of St. Barnabas Church. I also worked on the Board of The Oasis.

In June of 1996, I was elected by The Oasis Board to be the Canon Missioner to The Oasis, a position I held for five years. I worked closely with Bishop Jack Spong and Quean Lutibelle, traveling all over God's green earth - including Lambeth 1998 and a five year stint on the New Commandment Task Force - to proclaim the Gospel of Jesus Christ.

It was exhilarating but exhausting work. I have no idea how Bishop Spong and Louie Crew have done it for almost their whole lives. I could only take it for five years. I happily retired my dyke tiara to Susan Russell, who now reins as the Archlesbian of The Episcopal Church.

Long may she reign. She may be Archlesbian but Louie will always be Queen.

Louie has officially 'retired' as a deputy to General Convention three years ago. He hasn't posted on the HOB/D (House of Bishops/Deputies Listserv) since. He still maintains the birthday/anniversary mailing list and he's very active on FaceBook, but that's pretty much it.

He's been traveling a great deal with his beloved Ernest. You know. The "Sky Muffin".

As the spouse of a flight attendant, he flies either for free or greatly reduced cost, depending on whether it's a domestic or international flight. He takes full advantage of that benefit, as well he should.

We'll catch up tonight and I'll learn of all of his recent "adventures in retirement". I'll be sure to post pictures tomorrow.

Tonight, please raise your glass in celebration and honor of Louie Crew, fearless leader of God's Rainbow Tribe, Quean of our Hearts, and one of the truest Christians I know.

The Episcopal Church would not be where it is today were it not for his leadership.

We'll never be the same without him.
Posted by Elizabeth Kaeton at 6:15 PM

Oh no! Had I known of this joyous occasion, I would have hustled my significant bustle to NJ (Dio. of Nwk I presume) for the festivities. Long live the Queen, and Long may She reign ( .. and wave -- the ROYAL wave,of course)!

I met Louie at GC2009 and thought him a saintly-looking man. His halo shows even in his photos. But Louie is a saint full of fun and mischief. Louie's done more than his share in the serious business of spreading the Kingdom of God.

Thanks Elizabeth - definitely the quean of our hearts.

I raise my glass to you all. I met Louie and Ernest at the Tenth Anniversary Celebration of Integrity GA last October. I spent a little time with them at a gathering one evening and a couple of meals over the weekend. They are both a delight! Please give the a hug.

Wow-a gay flight attendant AND a gay Episcopalian! What are the odds?

God bless Louie and Ernest... Louie flew up to Vermont to be at our Holy/Civil Union in August 2000.... And I had the privilege of his staying with me even beforehand. He is an exemplar of civility and graciousness. I love Louie dearly.