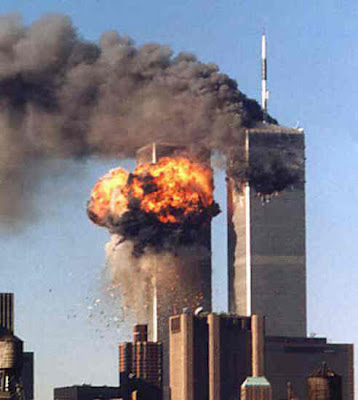 The beautiful, sparkling autumn day, that Tuesday, September 11, 2001, is hard to forget.

The sight of an airplane, from out of nowhere and yet an every-day occurrence in the Manhattan skyline - dwarfed by the Twin Towers, this one flying right into it.

The disbelief of what was happening, right in front of your eyes.

The exact moment someone said, "Ground Zero" and you instantly knew of what and where they were speaking.

Likewise with "The Pit", the sound of which hit you in the core of your being, delivering a momentary paralyzing sting that could only be diminished by putting your body into action.

The fire. The smoke. The black billows of clouds against the beautiful clear blue sky.

The smell of the thick rubber soles of the working boots of the responders which melted because the ground was so hot at Ground Zero, at The Pit.

The tears. The confusion. The pushing through the tears and confusion to help others. The pans of ground hamburg and hot dogs and baskets of rolls, donated by a local restaurant to Seamen's Church Institute, that became endless trays of sustenance and nourishment for the workers.

The bizarre scene of a NY rooftop picnic - hamburger, hot dogs, mustard, relish, mayo, potato chips, macaroni salad, - while the searchlights punctuated the black sky and the acrid smell in the air irritated your nostrils and the stung back of your throat.

Someone's office - desk and chairs pushed aside - now filled with boots and socks, donated by a local 'Surplus Store' so the workers could change from the ones that had melted on their feet.

The cheers that, not-often-enough, punctuated the gloom of the afternoon and evening when one somebody's someone had been found. Alive. Or, the tears of grief and relief when someone perhaps, was found dead. But, found.

The EMTs, and doctors and nurses, in their scrubs, hanging outside the hospital, waiting to tend to the injured that never arrived.  Not even a dead body to identify and tag.

Can there be anything more desperate than being skilled and trained and ready to help but unable?

The look and feel of the determination to fight against despair and push through exhaustion to continue the search to find someone's father or brother or sister or niece or nephew or neighbor or friend. Somebody. Anybody. Dead or alive but alive, please. Please?

The whispered words from the Eucharistic Service for the Burial Service, "Life is changed, not ended," which offered little consolation but somehow allowed you to put one foot in front of the other to offer help and consolation to others which, in itself, provided a measure of comfort.

The burly Irish American fire chief who said to me, "Giuliani says that crying makes you strong."  "I suppose Giuliani is right," I said. "If that's true, then I must be a 600 effin pound gorilla," he said.

And we laughed and cried and discovered that laughter and tears are the only authentic prayer in the face of overwhelming evil.

The sound of the thud as my knees hit the ground and the silent scream of relief and prayer that ricocheted round and round in my head when I heard our daughter's voice on the end of a cell phone say, "Mom? Mom? I'm okay. Yes, I'm okay. I'm okay. Are you okay?"

Walking into St. Paul's Chapel to have a moment of quiet prayer and praise and thanksgiving and seeing that a chiropodist had set up a "Maundy Thursday" station in the sacred-because-it-was-historic George Washington pew, tenderly caring for everyone's feet.

The stories. Of those lost. Of those found. Of those who searched. Of taking combs and brushes and toothbrushes to a central location for DNA testing. Of forms filled out and translators needed: Anyone speak Spanish? Portuguese? Lebanese? Saudi? French? Creole? Swahili? Anyone?

The ashes - a mixture of pulverized concrete and human cremains - which clung desperately to everything, everywhere, with the silent, urgent message: Do Not Forget Me.

We dared not shake the dust from our clothing. Or, our shoes. Or, our hair.

It was a day too horrible to speak of - except, maybe, once a year.

Truth is, you never really forget.

The weather, although nice, was a reminder to me of 9/11/11 in D.C. A faint hint of autumn with a slight cool tinge. The blue sky had few cloads.
When I dropped the children off at school I mentioned to the teacher that at least these kids are too young to remember that day. I wonder whether we should continue to have the public services across the country. Do they bred resentment and hatred against our American muslims? Instead of having the sad reminders should we perform some charitable act to commemerate the fallen?
Sorry for the rambling thoughts.
Maria

Maria - I hope American children don't grow up hating anyone - especially Muslims of any nation. Then , 9/11 would have been in vain

Thank you, my dear sister Elizabeth. Memory is the wound of knowledge; it can heal, but we will never be the same.

I am always at a loss to speak of 9/11, especially given the actions of the US in the following decade. I hope you don't mind, but I linked this post in my own blog as what I wish I were capable of expressing.

HowdidIgeththere - You can publish anything here, with attribution to the source.