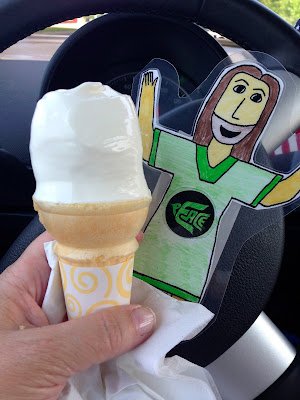 So, Flat Jesus and I were driving around Sussex County yesterday, visiting my Hospice patients, when suddenly, He asked, "What is all this I'm hearing about DOMA and Prop 8"?
So, I explained it to Him.

He shook his head and said, "Really? I mean, did I ever say anything about homosexuality? No, I don't think so. Not that I remember, anyway. However, I do remember saying 'Love one another'. Why is that so hard for people to understand?"

I told Him that I was certain that I didn't know.

He sighed and said, "Maybe instead of that 'New Commandment', I should have just said something like, 'Be Kind' or, maybe, 'Keep it simple'."

I told Him that I thought it might have been more effective if He had said something concrete. Like, "Take naps" or "Laugh a lot" or "Sing and dance like no one is watching" or "Have cookies and milk at the end of the day." Or, "Eat Ice Cream".

He thought it over and said, "Not bad. Hey, come to think of it, can we get a swirl cone of ice cream at McDonalds? I hear they are only 170 calories. And, they cost only a buck. My treat. I've never had ice cream before."

"Sure, I said. So, I swung into Mickey-D's and got us a celebratory ice cream cone. After we finished it he said, "You know, it's hard to hate anyone or feel violent after you've had an ice cream cone. Maybe you're right. Maybe I should have been more concrete."
Hmmm.... I said. "Love one another" or "Eat Ice Cream".

"Nah," I said. "I think you were right. Give people the operating principle - Love one another - and then let them use the intelligence and creativity God gave them to figure out how to live it out."
"You know," I said, "we often mess up, like yesterday with the Voting Rights Act. But, even when we mess up, it's like one of your Archbishops once said, 'God still reigns."
"Archbishop?, " he asked. "I don't have any archbishops. Neither do I have bishops or priests or deacons."
"I only have disciples," He said, more than just a little huffy.

"Right," I said. I mean, you know how he can get about "Temples" and "Den of Thieves" and all that. I was not looking forward to him taking out the whips and "pitching a fit".
He was quiet for awhile.  Then, he said, "Ice cream is good."

"Me, too," I said. "It's always good, but especially when you've got something to celebrate."

"Life is a celebration," Flat Jesus said, adding, "You know, it's a good thing these are only 170 calories, or I'd quickly move from being 'Flat Jesus' to 'Fat Jesus'."

He's got a weird sense of humor, that one. You know? But he's great company on long drives around Sussex County, DE in a car, visiting Hospice patients on a hot summer's day.

Especially when that day is an historic day.
Posted by Elizabeth Kaeton at 7:54 PM

For the record, it is possible to eat nothing but ice cream and New England clam chowder for a whole summer and lose weight (oh, and vast quantities of coffee ... I am the original caffeine processing organism) ... so Jesus would still be Phlat if he stuck to the program ... please tell him next time you're chatting.

Very funny post. Sometimes people that follow Jesus are so serious. I follow Jesus to and think he would shake his head at what people are doing sometimes in his name. Love and be loved is pretty simple.

Marthe - Yes, and I think working in a grocery store or as a waitress would help with that weight loss. ;~) but, I'll let Him know.

Grace WIP - I think we make Jesus laugh. A lot. The more serious we are, the more hysterical He gets.