In Memory of Her 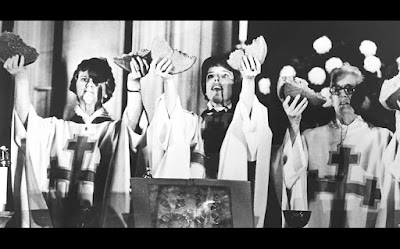 I'm remembering and giving thanks that forty years ago today, on September 16, 1976, The Episcopal Church voted to change the canons to allow for the ordination of women to the priesthood and episcopacy, effective January 1, 1977.

Many events led up to the making of this history. 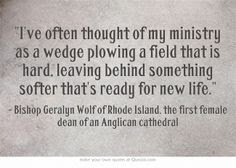 I'm remembering and giving thanks for Charles Willie, who resigned as PHOD in protest of the Aug 15, 1974 decision of the HoB to decry the four ordaining bishops' "violation of collegiality," refuse to talk with women, and assert the ordinations were not valid.

I'm remembering and giving thanks for all those men and women who declared that the theological sky was falling and that the world as we knew it would come to an end; who flew the Episcopal flag in front of their churches at half mast (signalling death) or upside down (signalling distress). They, too, made a public witness of their faith.

They, too, are part of our history and played their part faithfully, moving the ambivalent or undecided to take an uncomfortable stand for what they believed about God and Jesus and the Holy Spirit.

I'm remembering and giving thanks for all the women and men around the Anglican Communion whose faith and witness preceded and laid the foundation for this historic event in the life of our church; especially Florence Li Tim-Oi, ordained in Hong Kong in 1944, Deaconess Phyllis Edwards recognized as deacon in 1965, for the Anglican Provinces of Hong Kong, Kenya, Korea and Canada which begin ordaining women to diaconate in 1968, for the Anglican Church of Canada which changed their canons in 1975 and began ordaining women on November 30, 1976. 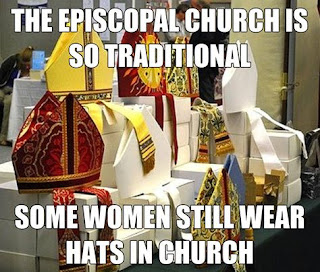 I'm giving thanks and praise for all the untold and unnamed numbers of saints whose witness and sacrifice allowed this historical change which we remember today. Without them, so many of us who are women and ordained in The Episcopal Church as deacons and priests and bishops would not have been able to be faithful to our vocational call.

Institutional change does not come without cost. It is always preceded by transformational change at the personal level. Please read, mark, learn and inwardly digest the history of this historical event.

And, when you do, do it in memory of her.

Click here for a full timeline of the ordination of women in the Anglican Communion.

Many thanks to Mary Frances Schjonberg  for this interactive timeline
Posted by Elizabeth Kaeton at 10:44 AM

Email ThisBlogThis!Share to TwitterShare to FacebookShare to Pinterest
Labels: Ordination of women TEC

Thanks for this. There are so many heroes (heroines) that we don't know much about. I've often thought there should be bios of all the early women priests (and lgbt) or a history book of that era. I think we take it for granted now. One of my former priests was one of the first two women ordained in Nevada in 1980. She began her studies in 1974 in anticipation of the change. Even in my former diocese, I was surprised how few knew her story except for older people. When I first attended that parish I asked her if a gay couple would be welcome. Her response was that we damned well better be and to let her know if we weren't. Reading this made me recall her funeral.