Into the Woods of Parish Ministry

Well, and now some of you are wondering, “What in the name of all that is holy is this all about? What’s going to happen? Where are we going?”

And those, my friends, are exactly the right questions to ask as together – bishop, deacons, priests and people of God – begin this new part of your spiritual journey.  I don’t have the answers to your questions, but I know where to find them.

When your almost-brand-new rector asked me to preach today, I thought, “Now why on earth would he do that?” I mean, I’ve loved being part of his priestly formation and I love even more that in spite of that, he considers me his mentor.

And, I want you to know that I gave him an out and told him he could ask anyone else to preach and it would not hurt my feelings. Nevertheless, he persisted. And, here I am.

So, like a lot of other things in parish ministry, if you don’t like this sermon, blame the rector. Rectors get blamed for lots of other things, so we might as well start off right now.

As I thought about it, it does seem that incongruity is one of the hallmarks of vocation. I could give lots of examples of that but I must say that it always makes me giggle when Jon or Michael posts something on their FB page about spotting a bear in the yard. Or, the amount of snow plowing that needs to be done on these long, winding, country roads.

While most clergy who work in urban areas dream of coming out to the country on their day off, we all know where Jon goes to unwind, right? The City. And Michael. Oy, Michael! If a tree grows in Brooklyn can a boy from Brooklyn grow in the woods?

And, you may have noticed but allow me to point out that both Jon and Michael are “Broadway Babies. Walkin’ off their tired feet. Poundin’ 42nd Street to (get to) a show.” 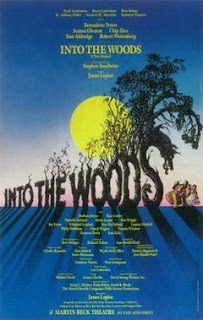 And then, the way my mind works in the word association process which is part of sermon prep (greatly assisted by sipping a glass of wine on my waterfront deck), it was just a short hop, skip, and a jump from Broadway… to The Woods of Kinnelon…. down the slippery slope of the White Knuckle Cliffs of Anxiety … and, behold! A sermon was born.

So, off we go then! Into the woods!

(Sung) The way is clear / The light is good / I have no fear / Nor no one should / The woods are just trees / The trees are just wood / No need to be afraid there— (there’s something in the glade, there). / Into the woods / Without delay / But careful not / To lose the way / Into the woods / Who knows what may / Be lurking on the journey?

Let’s start our journey by checking in with Jesus – always a good way to start any journey.  (Mt 28)

Mary Magdalene and, well, “the other Mary,” Matthew reports, “went to look at the tomb.”

Right. They probably went to tend to the corpse, as ritual of the day warranted that women do, but Matthew doesn’t even know the name of “the other Mary” so how could he possibly know about “women’s work”?
Never mind. Suddenly, there came a great rumbling from the earth, which became an earthquake. And, from the midst of the rubble of dust and rock, an angel appeared saying to the women, “Do not be afraid.” And then the angel directed them to go and tell his disciples that Jesus was resurrected.

But, lo and behold! The women ran into Jesus himself. (Who know what may be lurking on the journey, indeed!) The women greeted him with joy – can you just imagine! – and he told them to tell the brothers to meet him in Galilee. And then, another miracle: The Eleven actually believed the women and went to Galilee to the mountain to which Jesus had directed them.

There, on that mountain, the Resurrected Christ tells them to “Go and make disciples of all nations, baptizing them in the name of the Father and of the Son and of the Holy Spirit, and teaching them to obey everything that I have commanded you.”

And then Jesus says a most remarkable thing which also ends Matthew’s Gospel, “Remember,” he says, “I am with you always, to the end of the age.”

And, there it is, my friends – the essence of a journey in ministry. It’s a blueprint for the life cycle of parochial ministry. Something dies – or at least, something ends. We mourn. We tend to that which was lost. And then, in the midst of our grief, something happens to shake everything at its foundation. Things shift. We are scared. Confused. Light flashes. The dust clears. There is surprise. Insight. Delight. Joy. Reunion. And then, the commission is given to begin new life, new ministry.

Finally, the promise that makes it all possible: We are not alone. Not never. Not no way. Not no how. Which makes it bearable when the cycle repeats itself. It always does. Always will.

And so, once again, tonight we begin the journey into the life cycle of parish ministry, which has been described as an “impossible vocation”. 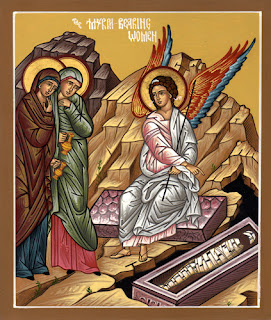 It has also been described as the very essence of sacrificial love – a continuous cycle of dying to self in order to seek and serve the Christ in others and be the Christ for others which will bring about new life. See also: impossible vocation.

See also: Into the woods.

When Steven Sondheim and James Lapine wrote this great Broadway play in 1987, they did so based on the work of psychologist Bruno Bettelheim's classic Freudian analysis, “The Uses of Enchantment: The Meaning and Importance of Fairy Tales”.

"Into the Woods" weaves together the stories of Cinderella, Little Red Riding Hood, Jack and the Beanstalk, and Rapunzel, and adds one invented by Lapine, about a baker and his wife. There’s also a cow and a child, a prince or two, some evil stepsisters and mean stepmother, a wolf, a giant and, of course, a witch.

The play is, in its essence, a parable about growing up and finding your place in the community, and about learning to live with uncertainty and ambivalence, and learning to love even more deeply in spite of all of that. In the end, doesn’t that pretty much sum up life in a congregation, a community of faith? At its best, church is a place where we can grow and mature not only spiritually but emotionally and psychologically, too.

That “we” includes priest, deacon, people and yes, bishop.

As with all parables, all of the characters are archetypes; they exaggerate and illuminate all of the qualities of our anxieties and fears and the lessons we learn as we grow and mature. Little Red Riding Hood sums that up well for us. This is the song she sings for us after she is cut from the belly of the wolf. We would do well to pay attention:

(Sung) And I know things now, many valuable things / That I hadn't known before. / Do not put your faith in a cape and a hood / They will not protect you the way that they should. / And take extra care with strangers, / even flowers have their dangers, / And though scary is exciting, /Nice is different than good. / Now I know, don't be scared. / Granny is right, just be prepared. / Isn't it nice to know a lot? / And a little bit. . . not.

But the journey leads us back, as it always does, “into the woods and out of the woods and home before dark”. Except, darkness does come, especially in the woods. In the play, the reality principle comes to the fairytale woods in the second act, in the form of death. In this case, it is a physical death, but there are many forms of death in the community of a life of faith.  It is then when the archetypes of our fairytale characters begin to take on depth and gravity.

The song "No One Is Alone" is a summation of the journey through the woods, and it's one of Sondheim's most beautiful melodies. The song is a call to adulthood, and it makes the case for shouldering life's troubles: that's where the rewards are. Cinderella sings to Little Red Riding Hood,


And so, the journey that begins with Jesus, returns to Jesus, and to the promise of the mystery that makes all ministry possible. Jesus assures us today even as he did to The Eleven so many centuries ago, “I am with you always, to the end of the age.”

It’s so important – as people of God, as priests, laity, deacons and bishops in God’s one, holy, catholic and apostolic church to remember that we are not alone. We do not do this miracle we call ministry alone. We are surrounded by such a great cloud of witnesses – the mystical sweet communion of the saints past, present and yet to come.

We are each baptized into the Royal Priesthood of All Believers and I firmly believe that all things work together for the good for all who love Christ Jesus.

Even giants and witches, and unfaithful princes and damsels in distress, and little ones in hooded riding cloaks who stray from the path, and grown men and women who choose the magic of a glass slipper instead of the miracle of love that rests in the human heart.

So I have one last image for that – one that has to do with this new, much longed for title of rector. I discovered this years ago when I was writing a sermon like this for a dear friend, a woman colleague, who was being properly installed – like a stained glass window - as rector.

Troubled by having been told that the root of the word ‘rector’ came from ‘rex’ meaning ‘king’ or ‘sovereign’ I decided to look it up in the OED (Old English Dictionary). Yes, it does mean “to guide or lead straight” and therefore, “to rule or govern”.

And, yes, it is still used in some UK and Western European countries to describe the headmaster of the university. And yes, the term is sometimes applied to the Queen Bee of the Hive – as an unfortunate association, in my view, as a king or sovereign.

What I discovered buried deep in the teeny-tiny little print of the tissue paper of the OED is that the word ‘rector’ is actually an ancient nautical term. Every sail boat has a rudder which is an underwater blade that is positioned at the stern (back) of a boat and controlled by its tiller, which helps to direct the boat in the desired direction.

However, I learned that there was a small piece of wood which connected the rudder to the tiller. And that small, seemingly insignificant piece of wood? The one which helps to keep the rudder going in the direction set forth for it by the captain who is at the tiller?

Yes THAT insignificant but very important piece of wood is none other than the rector.