A Mustard Seed of Faith 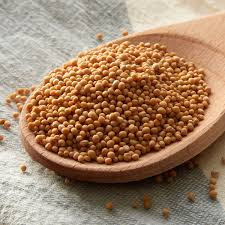 This morning, we hear Jesus say, “If you had faith the size of a mustard seed, you could say to this mulberry tree, `Be uprooted and planted in the sea,' and it would obey you.” (Luke 17:5-10

Let’s start by putting this into perspective. As we heard that old country lawyer and prophet, Habakkuk, say this morning,


Write the vision;
make it plain on tablets,
so that a runner may read it.

Sometimes, you know, you have to see it to believe it. So, I went to my local health food store and got some mustard seeds. I have them here in this jar which I want to pass around so you can see what it is Jesus means when he talks about the size of a mustard seed.

Mustard seeds are beyond small, right? They’re not even “tiny” Mustard seeds are flat-out “teeny-weeny-tiny”. And yet, Jesus says this is all the faith you need in order to move a mulberry tree.  Just that teeny-weeny tiny amount.

And, if you had a bad cold and were very congested, she would grind them into a paste and smear some on one of my grandfather or uncle's old flannel shirts. She called it a "Mustard Plaster."

I'm not sure how it worked, exactly. All I know is that after 24 hours of wearing that Mustard Plaster, you'd be breathing freely again. Well, that and sitting at the table hunched over a steaming hot bowl of water into which my grandmother would float a big glob of Vicks Vapo Rub, sitting under a 'tent' of a thick terry cloth towel or a flannel shirt.

Come to think of it, maybe it was the flannel that had medicinal properties.

Anyway, the other thing to know is that that teeny-weeny tiny mustard seed produced one of the largest trees in the plant kingdom. I'm talking HUGE. Ask the kids in the Church School. I just showed them a picture.

So, Jesus is saying that we need a teeny-weeny tiny mustard seed that will grow into a huge tree that will be no match for the mulberry tree.

So, let’s talk about that mulberry tree.

I have a friend who lives in Paterson, NJ who tells me that there are lots of mulberry trees in that city. Apparently, they were all planted in the 19th century.

Back when Paterson was the "Silk City" and producing more silk than any other American city they decided to raise their own silkworms rather than purchase them from Europe or Asia. He tells me that the ONLY food silkworms will eat is mulberry leaves.

Alas. the climate in NJ was too extreme for silk works and the experiment failed, but the trees continued to grow and flourish, much to the consternation of many. Mulberry trees are VERY messy trees (the mulberries drop all over or are picked up by birds and the berries and bird droppings stain wherever they fall). 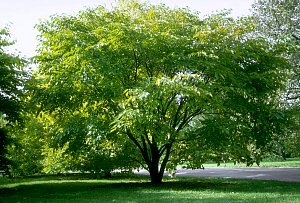 The roots of the mulberry tree go deep and if you cut it down, the remaining trunk will grow another tree so if you want to get rid of it you have to pull it up from the roots and dig around to make sure all the roots are gone.

It’s also true that if you attempt to cut down a tree it will only spring up again; and they grow quickly!

So, what Jesus is saying to us is that a teeny-weeny tiny seed of faith like a mustard seed is all the faith you need to move a hardy, stubborn, messy tree like the mulberry. When you think about that for half a minute, that’s pretty amazing.

We often sell ourselves short but we all - every single last one of us -  have this gift of at least a mustard seed of faith within us. There are ordinary people – just like you and me – who do extraordinary things.

The news is always all bad - it's what sells paper and airtime - so we may not pay it much attention, but, just this week, there were several stories about ordinary people who put their mustard seed of faith into action, with some pretty amazing results.

There was an incredible story in the news this week about Mr. Jim Freeman, who is a teacher in Kentucky. One of the classes in his school was taking a field trip to explore a fossil bed in nearby Indiana. Unfortunately, Ryan Kelly, a 10 year old girl in that class had a birth defect which confined her to a wheelchair, which prevented her from this class adventure. 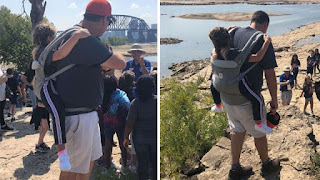 Except, the teacher, Mr. Freeman, was moved by her story. So, he put his faith to work with his intelligence and creativity and figured out a way to make that class field trip possible for her.

Mr. Freeman made a carrier for Ryan - sort of like the ones parents use for little kids - and carried her around on his back all day. That made  it possible for her to explore the fossil bed in the riverbank alongside the other teachers and her fellow students and classmates.
As if that weren't enough for one week, there was also an incredible scene in a courtroom in Dallas, TX. It came during the victim impact portion of the murder trial of Amber Guyger who had been found guilty of murdering Botham Jean whom she had mistaken as someone who had broken into her apartment.

What we witnessed was nothing short of amazing. Botham’s, 18-year old brother, Brandt, took the stand and said, “If you are truly sorry, I know I can speak for myself, I forgive you.”

And then, he told her that if she “gave her life to Christ, that would be the best thing Botham would want for you.” And then he asked if could give her a hug.

To the amazement of everyone in the room, he did just that.

But, it didn’t end there. After she pronounced her sentence, Tammy Kemp, the State District Judge, gave the prisoner a bible. She said two words, “Read this.” And then, the judge gave the woman she had just sentenced for the murder of an innocent man, a hug.


Now, I know there has been some controversy around that and her sentence which is no doubt warranted, but for purposes of this sermon, I want us to focus on what this young man and that judge felt called to do even in the face of what they knew would be controversial.

I'm quite certain that they knew that their embrace of a murderer would bring them criticism. They knew what they were doing was controversial. And yet, they did it anyway.

It reminds me of the story many of us heard this week on the feast of St. Francis of Assisi who came upon a leper as he rode around the countryside. According to the story, Francis got off his horse and met the leper. He embraced him and gave him a kiss of peace - some say, he kissed him on the mouth - and then the leper embraced him in return.

I don't know whether or not that story is true, but I do know that the three stories I saw unfold on my television set were true.