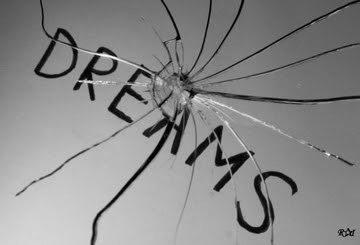 It began with a dream.

This is a sermon about dreams. It seems an appropriate topic on this last Sunday in Advent, a season in which dreams and hopes are at the center of the anticipation and expectation, the meditation and contemplation that are high on the spiritual “to-do list” on the Advent church calendar.


Dreams are at the center of this morning’s gospel story from St. Matthew, who seeks to tell us how “the birth of Jesus the Messiah” took place.

One could easily presume that we were to hear about the actual scene of the nativity. Instead, Matthew sets the context for us – a situation in which any and all dreams of respectability and conformity to cultural norms are shattered.


Joseph, a righteous man, was betrothed to Mary and, as the Gospel delicately puts it, “but before they lived together” (ahem!) Mary “was found to be with child” – which from the start, let’s be clear, the child did not come from Joseph, but “from the Holy Spirit.”


What is a righteous man to do, therefore, but to spare her from “public disgrace and dismiss her quietly”? Wait! What? This doesn’t make a lick of sense. 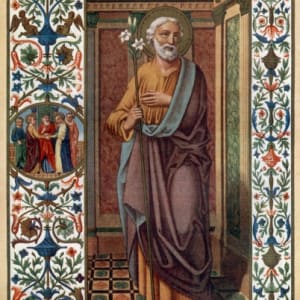 Even if Joseph ‘dismisses her quietly” well, she’s still pregnant. The only thing that changes is that she’s now an unmarried pregnant woman. Which, one would think, brings more – not less – public disgrace. So perhaps the one Joseph was “sparing public disgrace” was not Mary but himself.


See what happens when women get to tell the story?


So, that’s the context Matthew sets for the birth of Jesus. There are more dreams to be had and to be told. But this is how it began – by naming a dream that shattered all their dreams of respectability and expectation of “normal”. And they named that dream-shattering dream “God saves.”


One of my favorite albums – remember when there used to be ‘record albums’? – from another time in another place which seems like a galaxy ago, is Harry Chapin’s Greatest Hits.

Anybody remember the singer-songwriter Harry Chapin? If you don’t know his name you have probably heard his song, “Cat’s Cradle”. (“And the cat’s in the cradle and the silver spoon, little boy blue and the man in the moon . .  .”)


One of my favorite songs on that album – okay, I also love the song “30Thousand Pounds of Bananas” – is the song, “Dreams Go By”.

It’s a song about life and our youthful expectations about how our lives are going to be lived and the dreams we have that never come to be. Dreams about growing up to be a ballerina or a ballplayer. Or a doctor or a painter. And, instead, we get married and have kids and buy a home and, as they say, “settle down”.


Where do broken dreams go? 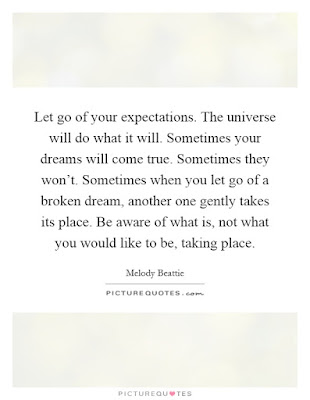 Every generation has a song with a similar theme. Gordon Lightfoot’s, “Broken Dreams”. Green Day’s, “The Boulevard of Broken Dreams.” Prince’s, “When Dove’s Cry.” Aerosmith’s “Dream On”. Mama Cass’, “Dream a Little Dream with Me”.

But, it’s Harry Chapin who asks, “Where do broken dreams go?” And this time of year, as we get closer to Christmas, is the time of year where broken dreams, long covered over by time and temporarily forgotten, surface from their places of hiding.


As a priest and a pastor, my phone has already started to ring off the hook.

This is the time of year when many of us lose sight of "the reason for the season”. The romanticism of the commercial understanding of Christmas can spill into a touch of melancholy for “Christmases Past” or, actually, if we’re honest, “Christmases Never.”

For some people, the season becomes stuck in the growing darkness of an unidentifiable type of general malaise that many may shrug off as "Oh, I'm probably just coming down with a cold." Or, “I’m just exhausted. I’m really bad at multitasking.”

But, in the evening, when yet another Hallmark Christmas story is told on TV, or another celebrity family or cartoon characters dance and sing their way into our living rooms, the memory of a loved one who has died or lives far away arises as well.

At that point, a Christmas malaise can wrap itself around our shoulders like an old, worn-out sweater.

Sometimes, that malaise can slip into a low-level depression that can look like the ice that has begun to form around the waters of the marshes where I live on Rehoboth Bay.

The ice doesn't stop the water from flowing but it's there, keeping the nourishment from those with whom we share this marsh at this time of year, the Canada Geese and Merganser Ducks and Blue Heron.

There may be increasing instances of low-level bickering. People can say insensitive, hurtful things. Tempers flare like a match on an old newspaper. Impulse control is severely strained. Ordinary family squabbles can get blown way out of proportion. Some storming out of the room may be seen.

Stop me if any of this sounds even vaguely familiar.

If it doesn't, hang tight. There are a lot more hurting people than you know, some of whom are sitting right next to you, putting on a brave face. 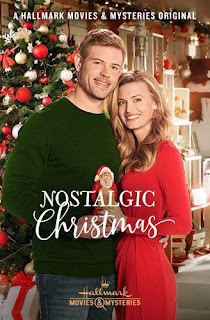 Amidst the sounds of the cheery 'ho, ho, ho' and the Salvation Army bell ringers and the Christmas 'Musak' on the radio, television and in every shop and market in town, it's hard to hear the heavy groans of a young Nazarene woman as she prepares herself to deliver a dream, a the promise of hope, a light in the midst of darkness.

And that dream, which she wasn’t expecting and didn’t plan for but none the less welcomed, would grow up to break her heart.

Here's what I've discovered: Anyone can have themselves a "Merry Little Christmas". That really doesn't take much effort. A few decorations. A few choruses of "All I Want for Christmas is You." Some things that sparkle. A string or two of colorful, twinkling lights. And, the purchase of a few presents no one really wants or needs, all wrapped up in cheery paper, now on sale for 50% off.

Christmas joy, however, requires none of that. It's not a luxury that can't be afforded but it does require a different kind of currency that is, in fact, not inexpensive.

Having a Merry Christmas or a Happy Christmas is possible and attainable. Generally, that happiness lasts for about a day – sometimes, it can last a whole entire week. But it doesn’t last.

Christmas joy, however, knows no restrictions of time. It surpasses notions of happiness. It cannot be contained by ideas of respectability and propriety.

Indeed, Christmas joy defies boundaries of logic and reason.  It makes little or no sense.  How can we have a Merry Christmas when our family looks nothing like the happy faces on the Hallmark Christmas shows? How can we be Merry and Bright when someone we love is ill or suffering? When I can’t afford to get the ones I love what they wanted? When I know I won’t be able to get what I want/need for Christmas? 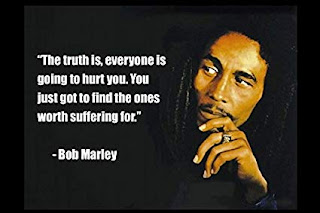 Christmas joy is found in the place where our disappointments and sadness, our mistakes and failures, our misfortunes and regrets are placed in humble dwellings, like a stable where the lesser creatures of God find shelter.

There, in that place, that which is quintessentially human – our brokenness, our vulnerability – is wrapped in rags and visited and blessed by The Holy. In that place, in that moment, our human brokenness becomes whole, becomes holy.

We may feel lonely or alone, but because of the Incarnation, because God became human, we are never alone. Not in our sadness. Not in our broken dreams. Not in our poverty.

There's a story going 'round Facebook about a teacher who knows about Christmas joy. She teaches in a poor region of the country and at Christmas time, though she tries to tell the parents and children not to buy her Christmas presents, she gets them anyway.

Her favorite present, however, was a small plastic bag of the marshmallow treats from a box of Lucky Charms. 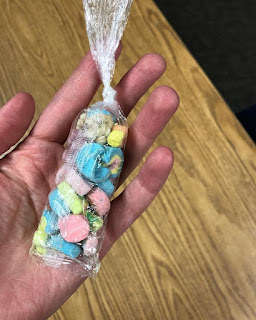 Many of the children qualify for the School Breakfast Program. One of the little girls took her breakfast box of Lucky Charms and sorted out all the marshmallow treats from the rest of the cereal.

She then took the plastic bag which held her plastic breakfast utensils and filled the bag with the marshmallow treats from the Lucky Charms cereal and gave them to her teacher as her Christmas present.

Now, I don't know if that child and her teacher had themselves a Merry Little Christmas. They probably did. But, I know they both knew something about Christmas joy.

Indeed, I'm certain that the Christmas joy they had experienced previously stayed with them which inspired both the Christmas present and the gratitude felt by the recipient.

Bob Marley is quoted as having said this: “The truth is, everyone is going to hurt you. You just got to find the ones worth suffering for.”

The miracle of Christmas is that Jesus came because we are all worthy of his birth, his life, his death, and his resurrection. The joy of Christmas is that no matter who we are, or who we think we are; where we’ve been or where we think we are going, we are all worthy of the sacrifices of God in Christ Jesus.  Jesus came to each one of us. As the angels sing, “For unto us, a child is born; unto us, a child is given.’

St. Matthew tells us: “Now, the birth of Jesus the Messiah took place in this way.”

It began with a dream – the appearance of an angel who brought to Mary the dream of God. It was a dream that broke expectations of what and who will save us from ourselves.

It is not super-human strength; no, quite the opposite: Vulnerability. Meekness. Sacrificial Love, these three, all bundled together in rags and lying in a place beyond respectability in the company of the lesser creatures of God. 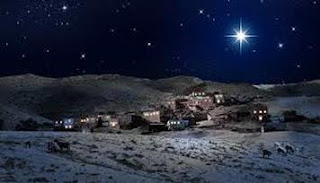 One way to find Christmas Joy can be found in the words of the third verse of "O Little Town of Bethlehem". There, buried deep in the lyric, you will find the key to open your heart to the the miracle of this season where you will find more than enough fuel to enlighten the darkest night of your soul.

How silently, how silently,
the wondrous gift is given;
so God imparts to human hearts
the blessings of (God’s) heaven.
No ear may hear (Christ’s) coming,
but in this world of sin,
where meek souls will receive him, still
the dear Christ enters in.

Be silent, then, and listen. Listen to the seasons passing. Listen to the wind blow. Listen to the children laughing. And, you will find the place where broken dreams go to be blessed and born again in the form of love, human and divine.

May your broken hearts be transformed into a manger to hold the dream of Christmas joy.