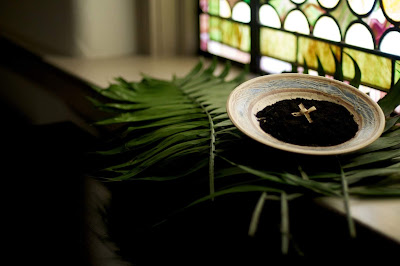 So, which is it? Do we listen to Joel or do we pay attention to Jesus?

Joel shouts: Blow the trumpet in Zion; / sound the alarm on my holy mountain!
Sanctify a fast / call a solemn assembly

Or, as the words to that old song goes: “Pack up the babies and grab the old ladies and everyone knows, everyone goes, to Brother Love’s Show.’

But, Jesus says, “Beware of practicing your piety before others.
Don’t sound the trumpet before you.
Go to your room and shut the door and pray in secret.”

So, which is it? A big show or quiet, secret piety?

Here’s the perennial question of Ash Wednesday: What do you do with the ashes on your forehead? Do you keep them on or wipe them off? 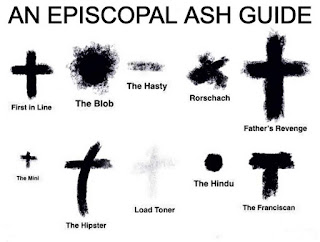 If you keep them on your forehead, are you in violation of what Jesus is saying?

Given what Jesus is saying, why does the church impose ashes on people’s foreheads, anyway?

It won’t disappoint some of you to know that I’m going to answer those questions with a story.

One of my dearest friends and colleagues in The Episcopal Church was a man named Lane Dennison. Lane was one of the finest preachers in this church. He was also an author and a wonderful storyteller.

I miss him all the time.

One year, he and his band were invited to play at the famous NY Jazz Club known as Birdland. He couldn’t believe it. This was a fabulous opportunity. How could this have happened? And then, he looked again at the date.

The first night of the band’s performance was Ash Wednesday.

Suddenly, it made sense. It didn’t matter. It was THE BIRDLAND. Of course, they would go.

Lane and his band members took the subway to midtown Manhattan for rehearsal. Birdland is on W 44th St. So they decided to stop off at the noonday Ash Wednesday mass at St. Mary the Virgin Episcopal Church on W 46th Street.

The church is also known as Smokey Mary’s for its High Anglo-Catholic style. (It’s also known as “the last virgin on  46th Street,” but that’s another story for another time.)

Every member of the band got a huge, black smudge of ashes on their forehead.  As they walked out of the church doors and down into Times Square, they engaged in a discussion of the perennial question of the day: “What do you do with the ashes on your forehead? Do you keep them on or wipe them off?”

Now, if any of you have been to Times Square in New York, you know that there is a small tribe of people who roam the streets there. Some of us call them "The Wild People of Times Square."

Just as Lane and his band got to Times Square one of the Wild Men came up to them, looked at the smudges of ashes on their foreheads and started yelling to the crowd: “Do you SEEwhat they have there? DO YOU SEE IT? Look everybody! Do you SEE those ASHES on their FOREHEADS?”

As a small crowd stopped to look, he asked,

As Lane tells the story, for a few minutes, something close to another miracle happened on 42nd Street. There was actually a few moments silence on Times Square. 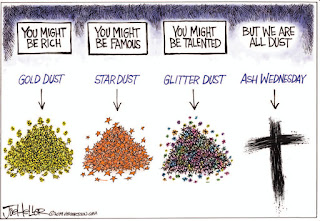 That was quickly broken by the Wild Man of Times Square who began to yell at the top of his voice:

"IT MEANS WE'RE ALL GOING TO DIE."

And, just as quickly as he had appeared, the Wild Man of Times Square disappeared.

But, he had answered the question. Lane and his band decided they would leave the ashes on their foreheads.

Why? Because, they decided that, for them, that’s the whole point of the journey called Lent which we are about to take. We’re all human. That means we’re all going to die. Because our time on this earth is finite, limited. God is unlimited. Infinite. We are mortal. God is immortal.

Ash Wednesday begins a 40-day walking pilgrimage into the fullness of what it means to be human. That is important because we believe that an essential part of God came to earth and became human.

We believe Jesus was fully divine and fully human.

Because Jesus was fully human, he lived fully and died the shameful death of a criminal, on a cross.

But, he died so that we would know the promise of life eternal.

It’s important that you get the message of that mystery. What you do with it, however, is up to you. You’ll not find any Ash Wednesday police force, checking to see if you have your ashes prominently displayed or if you’ve wiped them off.

It is important to remember something else Joel said, “Rend your hearts, not your garments.”

As my grandmother would say, at some point you realize that you have fewer years ahead of you than you do behind you.

Lent is the time to consider your life and to consider what God created you to do with the time you have been given with that one, precious life.  And, it's a time to ask what’s standing in your way of becoming all that you are and all God intended you to be. 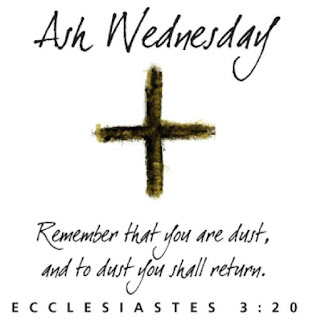 Lent is a time to journey deep into to mystery that JRR Tolkien wrote in The Lord of the Rings, a riddle first given in the letter left for Frodo by Gandalf, so he would recognize Aragorn.

“All that is gold does not glitter,
Not all those who wander are lost;
The old that is strong does not wither,
Deep roots are not reached by the frost.

From the ashes a fire shall be woken,
A light from the shadows shall spring;
Renewed shall be blade that was broken,
The crownless again shall be king.”

It’s an important journey, this riddle of our lives.

Because, the Wild Man of Times Square was right.

We’re all going to die. And, we’re promised life eternal.

So, whether you listen to Joel or Jesus, or a bit of them both, the question remains yours to answer:

What are you going to do about the ashes on your forehead? And, why?

And, with those questions, your Lenten journey will begin.