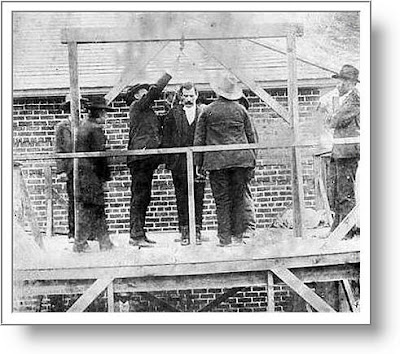 Note: This brings 'spin cycle' to a whole new level. Hat tip to Doug for this one.

Judy Wallman, a professional genealogy researcher here in southern California, was doing some personal work on her own family tree. She discovered that Harry Reid's great-great uncle, Remus Reid, was hanged for horse stealing and train robbery in Montana in 1889. Both Judy and Harry Reid share this common ancestor.

On the back of the picture Judy obtained during her research is this inscription: 'Remus Reid, horse thief, sent to Montana Territorial Prison 1885, escaped 1887, robbed the Montana Flyer six times. Caught by Pinkerton detectives, convicted and hanged in 1889.'

So Judy recently e-mailed Congressman Harry Reid for information about their great-great uncle.

Believe it or not, Harry Reid's staff sent back the following biographical sketch for her genealogy research:

'Remus Reid was a famous cowboy in the Montana Territory . His business empire grew to include acquisition of valuable equestrian assets and intimate dealings with the Montana railroad. Beginning in 1883, he devoted several years of his life to government service, finally taking leave to resume his dealings with the railroad. In 1887, he was a key player in a vital investigation run by the renowned Pinkerton Detective Agency. In 1889, Remus passed away during an important civic function held in his honor when the platform upon which he was standing collapsed.'
Posted by Elizabeth Kaeton at 11:56 AM

Elizabeth+,
I also remember a 'Remus Rodham' (as in Hillary) version of this urban legend circulating several years ago.

I'm certain that (most of) my family would want to sanitize my branch of the family tree as well. Better to be a horse thief or train robber, than a lesbian.

I really think that (the re-write) is a joke, Lizbeth.

I just thought it was funny.

It IS funny. Damnit.