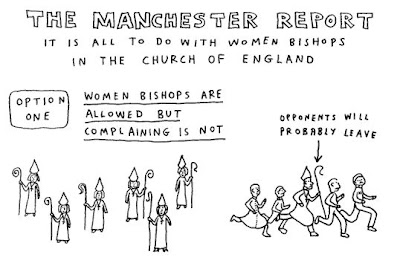 [Church of England] The General Synod will have its first opportunity to consider draft legislation enabling women to become bishops in the Church of England in February, having given an in-principle agreement to the shape of the legislative package last July. The Legislative Drafting Group on Women in the Episcopate, chaired by Bishop Nigel McCulloch of the Diocese of Manchester, on December 29 published its further report and drafts of a measure and associated amending canon.

"We have published our further report at the earliest opportunity to give everyone the chance to study it before debate. We finished our discussions only just before Christmas," said McCulloch. "The General Synod mandated us to draft a measure including special arrangements, within existing structures, for those unable to receive the ministry of women bishops and to do that in a national code of practice. We believe we have achieved that by providing for male complementary bishops, as we suggested in our earlier report, and now hand our work to the synod to discuss the drafts in detail."

The draft measure sets out legislation to accord with the mandate given by the General Synod last July that "special arrangements be available within the existing structures of the Church of England for those who as a matter of theological conviction will not be able to receive the ministry of women as bishops or priests" and that those arrangements "should be contained in a statutory national code of practice to which all concerned would be required to have regard." The draft measure provides for such arrangements, which include -- as foreshadowed in the illustrative draft Measure circulated in July -- provision for male "complementary bishops" to whom authority to provide episcopal ministry would be delegated by diocesan bishops.

A covering note to the drafting group's report from the House of Bishops acknowledges that the house would continue to have a special responsibility for seeking to help the Church of England, through the legislative process, come to a conclusion that built trust and that enabled as many people as possible to remain loyal Anglicans notwithstanding their differing theological convictions on this issue. Individual bishops would be able to lend their support to attempts to amend the draft legislation during the revision process. 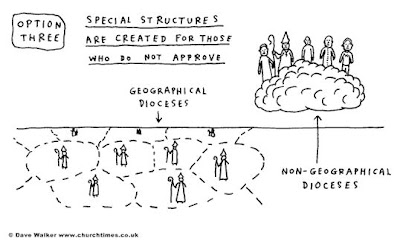 The further report and drafts of a Measure and associated Amending Canon, together with an illustrative draft Code of Practice and an Explanatory Memorandum, can be read here.

In 2006, the synod passed a motion calling for the practical and legislative arrangements of admitting women to the episcopate to be explored and inviting dioceses, deaneries and parishes "to continue serious debate and reflection on the theological, practical, ecumenical and missiological aspects of the issue" of ordaining women bishops.

It is estimated that women bishops in England will not be canonically possible until at least 2014.
Posted by Elizabeth Kaeton at 10:12 PM

Yes: I passed Dave's cartoon around the English College of Bishops the day it was published, and it raised a few knowing smiles;(http://bishopalan.blogspot.com/2008/05/worth-at-least-thousand-words.html) I'll be looking out for any comment Dave may have on the latest proposals to handle this one.

I have heard of flying bishops, but Option 3 looks to be introducing floating bishops.

I do love Dave Walker: his three cartoons are so much clearer than the pages and pages (or the summary) of the Manchester Report.

Oh well, it's nice to know that women bishops are possible, if not likely to happen yet. Makes me feel all warm and fuzzy inside.

The fact that my mother rang me up at 10.45pm to tell me this a couple of days ago tells me that...

Well, that she now takes some notice of the CofE on my behalf. Which is nice.

Yeah, Dah-veed, I was thinking I would not have given the floating bishops any credit for doing anything akin to what angels can do....thought Dave Walker was being too kind to them!

If we're going to buy into the Popoid notion of "complimentarity", doesn't it seem to DEMAND that where there is a male diocesan, there be a complementary female bishop as well?

[If I might correct D Walker: no option is foreseen, I'm sure, which disallows complaining . . . only insurrection! ;-/]